Home » Blog » Child Learning » What Is the Perfect Age for a Child to Be Independent?

What Is the Perfect Age for a Child to Be Independent? 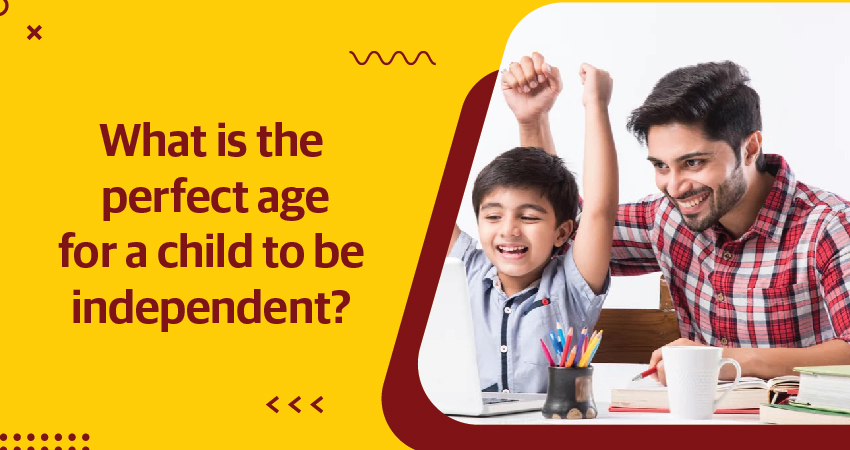 Parenting is a process, a difficult but rewarding one. Making your child self-sufficient and capable is one of the most beautiful and valuable gifts you can offer her. As they progress in life, independent children can accept responsibility for their ideas and actions, becoming good decision-makers, confident in their skills, self-motivated, and able to collaborate with their parents based on guidance, support, respect, and affection. For preteens and teenagers, becoming independent entails trying new things, taking on more responsibility, making their own decisions, and making them independent enough to figure out who they are and what they want to be.

Developing a child who is independent is an important step on your child’s path to maturity. Independent kids are better at accomplishing their tasks. But do you know the right age for a child to become independent? This blog gives you the whole picture.

Importance of Independence in a Kid’s Life

For those of us who have raised independent children, we can attest to the many benefits our kids gained, which will serve them well in adulthood. Growing up feeling capable and secure builds a foundation for success and happiness.

Independence is essential for children as they grow up to become independent, capable adults. For instance, it helps your child develop self-confidence and problem-solving skills that can make all the difference in her ability to succeed at school and in life. Also, independence builds character and teaches kids how to be responsible for their favorite actions.

Here’s a list of things you can do to start easing up and allowing your kids more independence.

Arrange for a Drop-Off Playdate

This is fantastic for developing independent relationships outside of the house and providing your kids time away from you prying. Your child may be ready if she attends school a couple of days a week and has made some friends. If you’re unsure, start with a buddy from your neighborhood; you can always cancel if things don’t work out.

Playdates are good, but they should be treated as a regular date with your child to make them more independent; it is another chance for him to show that he can do things by himself and gain independence. A potential downside of playdates is the fact that you may see him having fun without your supervision. This could undermine your confidence in him and lead to overprotecting.

4 Years Old and Up

Send Your Child to Camp, Whether They Sleep Away or Not.

What is it about camp that makes it so independent? There are no parents! Children as young as Pre-K can attend day camp, and while some children are ready for sleepaway camp sooner than others, many children feel ready to attempt it for the first time between the ages of 8 and 12. The sense of independence that your child will gain from attending camp is invaluable. The fact that he must learn to get along with children and staff that are not you, means that he will be able to relate well to a peer group when school begins a year or so later. It is also short enough in duration for him not to feel overwhelmed by the experience. Camp is also good preparation for the independence of college life if he plans to attend a university.

6 Years Old and Up

Let Them Take a Solo Walk for a Few Blocks

Some areas appear to be safer than others. Some children appear to be more prone to irresponsibility than others. Allowing your first-grader to play in the front yard is a good place to start if you’ve never allowed her out the door alone. This is a fantastic opportunity to make some new acquaintances in your neighborhood if they haven’t already. That way, you’ll feel more comfortable sending your kid down the street to visit a neighboring friend’s house, possibly first messaging the friend’s mother to check out the window. After that, gradually increase your child’s ability to walk to school or another regular location. This will make her more independent in her life.

7 Years Old and Up

Assign Them a Task at the Grocery Store.

Counting money, conversing with others, and deciding which juice drink to buy while you sit back and watch? It may seem like a routine task to you, but it is an independent and even a life-changing event for him.

Allow your kid to walk ahead to another grocery store aisle and select anything from your family’s grocery list, such as his favorite variety of Capri Sun (it’s a 100% juice drink). Maybe you’re just keeping an eye on him from down the aisle, but as he gets closer to the shelves, he’ll gain confidence and feel independent.

Drop Them to Hang Out with Their Friends Alone

Sure, this is excellent practice for sticking to a schedule and budgeting. Start small if it feels too dangerous right now. Take your junior high schooler and her friends to the movies—or to the mall, where they may spend an hour wandering around. This can help them be independent outside the home.

Let Them Go Out Alone for a While

Once your child can walk alone in familiar surroundings without needing to worry about traffic or getting lost, she’s ready to start walking home from school. This way, she can get used to walking a route on her own. She’ll start by staying within eyesight of the school, then spending more time in new surroundings as she builds up confidence and makes them feel more independent.

When minor difficulties arise, don’t rush to address them. Motivate your kid to solve problems by asking whether she can think of a solution. Allow her time to ponder before providing your suggestions if she’s stumped. Stay as calm as possible. You could end up with more messed-up mattresses and milk puddles, but hearing your newly independent kid proudly proclaim, “I did everything myself!” is well worth it.

8 tips to get your kid into learning music

School Bully: Your Child’s Version of the Monster Under The Bed