Cognitive Functions in Kids and its Impact on Decision Making 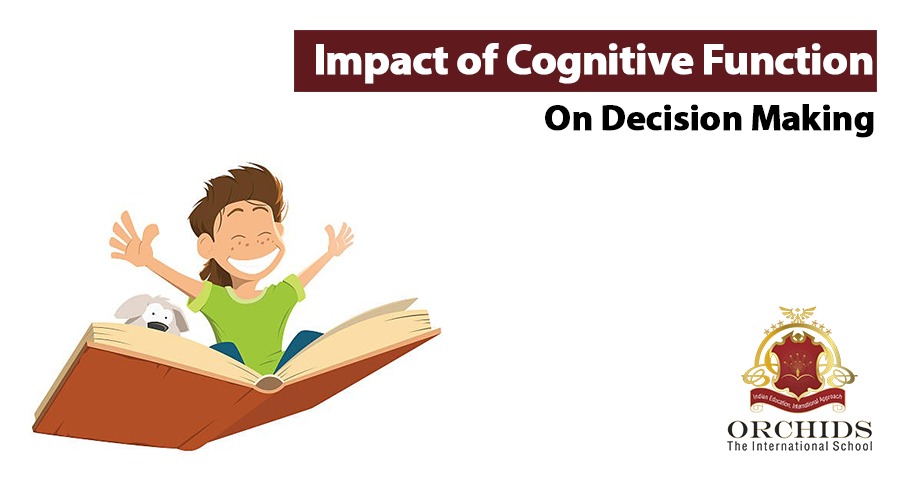 Cognition refers to “the mental action or process of acquiring knowledge and understanding through thought, experience, and the senses. It encompasses many aspects of intellectual functions and processes such as attention, knowledge formation, memory and working memory, judgement and evaluation, reasoning and “computation,” problem-solving and decision-making, comprehension, and production of language. Cognitive functions in kids use existing knowledge and generate new knowledge. (Wikipedia)

What is Emotional Learning?

Emotional learning or better cognitive functions begins at a very tender age, as children experience and learn a wide range of emotions and evolves as they grow. It is a complex process that begins in infancy and continues into adulthood. The way children understand and interpret their feelings and emotions and that of others have a significant impact on their behaviour, choices, and how well they cope with life.

In other words, the accumulation of information that we have acquired through learning or experience is known as cognitive functions.

Attention is cognitive functions that allows us to concentrate on a stimulus or activity to process it more thoroughly later. It has been considered a mechanism that controls and regulates the rest of the cognitive processes.

Perception affects emotions significantly, and we may react involuntarily due to our perception of a particular object. E.g., If a child is raised in a comfortable atmosphere, provided with care and affection, he/she may perceive the world to be a safe place. A child raised in a rough situation may perceive the world differently, reflecting emotions different from the former child.

The cognitive functions allows us to code, store, and recover information from the past. Memory is a fundamental process for learning, as it is what will enable us to create a sense of identity. Memory also affects emotions. E.g., a child may fear a particular person if they have a bitter memory.

Cognitive functions in kids are substantial and should be deeply understood, and that is why is it is imperative for teaching your child to identify and express emotions.

It allows us to integrate all of the information we’ve received and establish relationships between events and knowledge. To do this, it uses reasoning, synthesis, and problem-solving.

Language is the ability to express our thoughts and feelings through the spoken word. It is a tool that we use to communicate and organize and transmit information about ourselves and the world. Children may find it difficult sometimes to analyze a person’s feelings through his facial expression. But after studying his words, they may be able to comprehend their cognitive functions better. Thus, knowing what emotions to express what not to.

Learning is the cognitive process that we use to incorporate new information into our prior knowledge. It includes things as diverse as behaviors or habits. It has habits like brushing our teeth or learning how to walk and learnings through socialization.

Why is It Important?

From an early stage, children are not merely passive observers. They observe everything happening around them, and they develop their theories. They analyze how the world of people, other living things, and objects operate. In this way, you can say that child participation is already there in the decision-making process, but it’s just building itself.

When children begin to show considerable mastery of emotions, emotions become more elaborated cognitively; for example, children become aware of which feelings are socially acceptable or not, “good” or “bad.” They understand in which situations emotions are appropriate to express and which ones to be avoided. Cognitive functions in children begin to acquire a more profound understanding of how emotions “work,” learning to express those more desirable emotions than what they are feeling. They learn to control their feelings owing to cultural and social rules and conventions.

Teaching your child to identify and express emotions is an essential part of their upbringing. Cognitive development or cognition in children plays a crucial role in shaping the emotional competence of a child. These cognitive functions in kids help them in their future. They need to understand not just their own emotion, but also others, and by active child participation only they learn through cognitive development.

11 tips on building self-esteem in children