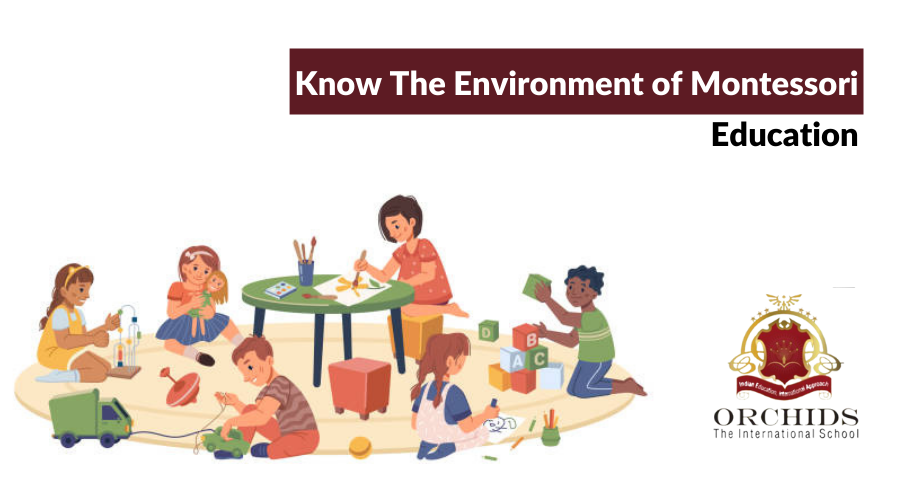 Montessori education is a prepared environment custom created for a pleasant appearance in which each element represents a reason working for the upliftment of the child’s brain and knowledge. It is a mixed environment classroom differentiated into groups over three years. It can be understood as an advanced kindergarten for Millenial toddlers and infants.

Now this works as an ecosystem that reflects respect and solidarity in all the students naturally. This ecosystem offers an infant endless opportunities to choose their interests and vocations freely. This filters students from all the subjects they aren’t interested in. Also, it fuels a more extended period of concentration and focuses on subjects and things students like, and hence they grow at a drastic speed and show harmony in the classroom.

This is a proven method where toddlers grow in a scientifically designed society of other students inside a kindergarten belonging to different age groups. Hence, freedom develops in an area within limits. Most importantly, this helps a student discover their errors and make them responsible for their learning. It works as an effective toddler program for preschool and kindergarten.

Such facts encourage parents to think more about their children while comparing admissions in a Montessori education to others.

An Adult Works as an Observer and a Guide

They stimulate the child with all his/her effort. This allows children to think critically and act accordingly and tend toward developing confidence and routine discipline. Montessori education has been illuminated as an all-round education.

An infant beyond our beliefs learns, attracts, and understands more sharply in such age and environment. Thus such infant or toddler programs enhance their learning and grasping ability.

Admissions to a Montessori school introduce your children to the environment, which is made directly proportional to children’s height and reaches with concepts like low shelves, chairs, and tables of various shapes and sizes per the children to sit individually or enjoy in groups.

The learning areas are differentiated based on themes. Study-related materials and books are kept on the shelves, giving great freedom of learning to each child; children may form groups or learn individually.

It is readily observed that such environments induce positive energy in the minds of the children and students of different age groups. It helps students respect their style and rhythm, such as toddler programs in Montessori education schools or kindergarten are customs created especially for this.

Now each student is free to pick their study material from the shelves and, after reading it, to keep it back so that others may use it as per their interests. .As you may see, this also promotes the practice of sharing with others.

The environment makes students independent, choosing their way of exploration and learning process. This environment is the same where it gives freedom and independence to the student and also makes it a fun activity as they do not have to sit through a class of an hour with no interest in the given subject.

One of the many reasons parents seek admission in Montessori education is because they are given the freedom and, at the same time, are made independent, which they won’t become at home.

Dr. Maria Montessori, who introduced this method, believed that every teacher should follow the child instead of the child following the educator. This way, only the method will reach success.

By following the child, a teacher can evaluate how and what are the needs of every toddler or an infant separately. By doing so, you create a healthy and spiritual environment for every child, and such ecosystems are vital for the child’s overall growth to respond to those needs. Children’s development emerges as a need to adapt to his/her environment: the child needs to give meaning to the world that surrounds him/her, and he/she constructs him/herself with this world.

Admissions in Montessori education are steadily increasing because it has a scientific logic behind it.

Maria Montessori proposed that each infant goes from infancy to adulthood in 4 stages; these stages are called “Planes of Development.” Each period has its parts to play in the growth of the infant. In her book, The Absorbent Mind, she explained that: “just like the caterpillar and the butterfly are two different creatures to look at and in the way they behave, yet the butterfly’s beauty comes from the larval form, and not through any efforts –

Montessori education materials were scientifically designed curricula in context as an experiment within the classroom, paying particular attention to children’s interests.

Now, these materials help children to explore in their own way and make them independent. This becomes a repetitive process, and hence comes concentration.

In the Montessori education curriculum, the material speaks for the child itself, if the child has used it correctly or not. This is called ‘control on error’ and where each material explains a new concept. So the margin of error in such circulars is very rarely observed. Thus, the next part is called isolating qualities, where the curriculum isolates the child, so they focus on it only and nothing else.

The Montessori teacher, called directress or director depending upon their gender, observes every child based on a list of things they make every week. And based on their observation, they help infants grow and reach their targets while letting them use their imagination and providing creative liberty.

“Spiritual embryo” means the first three years of an infant’s learning stage in which the toddler lays the foundation stones of the learning. These three years should be taken into account very critically as all the coming year’s education and skills are based on this only.

An infant builds its psychological and inner understanding through these years only, like wet clay, and these are the core years where you can turn the toddler into almost anything,

These are the years to give your infant’s mind and heart the right shape to make him come close to the culture, emotions, feelings, and even for future experiences.

The Montessori education program and its curriculum concentrate on developing speaking, independent movement, and coordination, tending to give the child the right confidence to go out in the world and make the best out of it.

The learning age curriculum for children from 3 to 6 years old are observed in four areas:

2. Sensorial: children learn through senses more than through their actions. Each child learns from its sensory abilities through particular quality: smell, size, weight, texture, flavor, color.

3. Language: the language can be perceived as the first communication tool that they had already acquired. Children can communicate intelligently and slowly understand its application and importance to speak, tell, listen, and respond. Simultaneously, they learn to write and hence feel the touch of it, also learning about history, music, and arts simultaneously.

4. Mathematics: materials that help the child learn and understand mathematics and lead children intuitively build a strong understanding of numbers and their applications. Such as geometry, algebra, and series, etc.

The classroom curriculum for 6 to 12 years old comprises an evolutionary and integrated vision of knowledge and skills growth. It consists of five great fundamental lessons, out of which particular studies of various areas develop. Lessons are designed to induce imagination and admiration for the creative toddlers and infants of our society.

Thus, this is Montessori education, and we hope it helps you and your child make better decisions at the time of admission.

Looking for the best Educational Toys for Kids? This blog has it all!

Choosing a School in Jp Nagar: Is a Co-Ed School Better Than a School Supporting Gender Segregated Education?

In what ways do schools in newtown promote adaptive physical education?