How to Teach Your Kid A Foreign Language 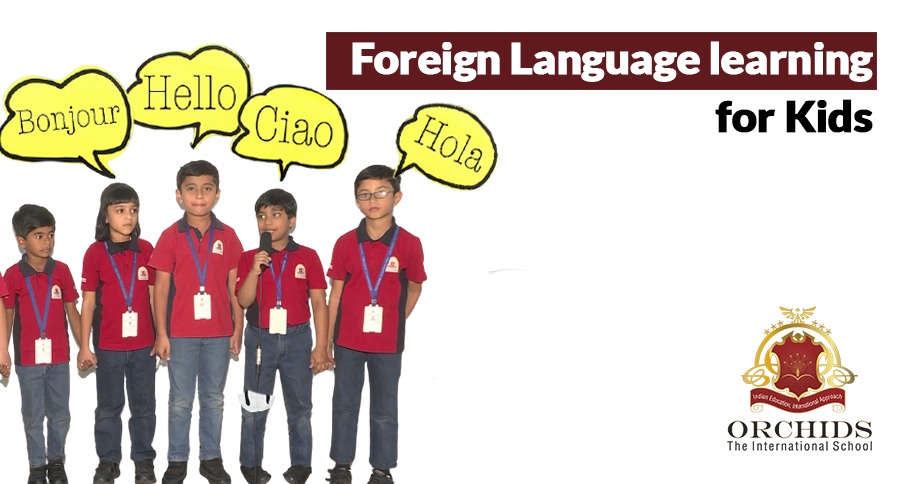 A child in the mother’s womb becomes receptive to the environment in which he/she is being nurtured. Add to that, researchers found that children are also influenced by the various sounds of their mother tongue which they hear in their last trimester. As children grow, they are able to make more than 500 sounds and foreign language in various accents and dialects, which indicates their exposure to various sounds from different languages.

If your child is growing in a bilingual environment, he/she is already exposed to more than one language. If you are planning to teach a foreign language to your child, starting as early as 3 years can work wonders for his/her cognitive development!

It is of utmost importance for parents to first determine the right age to introduce a foreign language to their children. According to Jean Piaget, a renowned developmental psychologist of the 20th century, a child’s cognitive development takes place at different ages, ranging from 2 years to adolescence.

This development is categorized into four stages by Piaget :

In the preoperational and concrete operational stages, children learn to derive meaning from language and relate objects with it. They also develop problem-solving skills and are able to use their imagination and memory in a structured way. This age group is best if you want to introduce foreign language learning to your little toddler.

An individual’s ability to actively learn grammar lasts till the age of 18 years, after which it starts to decline. Hence you must start as early as possible for your child to become fluent in the language you wish to teach them.

How Can I Teach My Child a foreign Language?

How to teach a foreign language to your toddler should not be a brainer in today’s digital era. There are many online websites and apps available to teach foreign languages to your child, from the comfort of your home! There are websites which draw out the curriculum based on the progress, development and age of your child too! If you are looking for a physical learning environment to teach your child a second language, then you can also find language courses available near your locality.

It is no secret that learning a second language or a foreign language has its own perks in terms of skill development of your child. Apart from this, it has various other benefits of making your child bilingual or multilingual by teaching them as many languages as you want!

5 Benefits of Teaching a foreign Language

Here are 5 such Benefits of teaching second language to your toddler as soon as they reach their cognitive developmental age:

As kids grow older, they tend to fear making mistakes, even if it is a small one such as a spelling error in one of the essays. Toddlers, who have just begun reading and learning, do not possess any such fear. They are free to error as that is the only way they learn to progress. This acts as a big advantage when you are planning to teach a foreign language to your tot!

Learning a foreign language teaches your kid a lot about the country’s culture, lifestyle, food and traditions! Their knowledge expands by learning about new things while building a close relationship with your native language. Your kid becomes able to point out similarities and comparisons between the two cultures which gives them the power to look at the world with a new perspective!

A study found that learning a foreign language helps boost the brain and enhance problem-solving skills in children. It also motivates them to think critically, which is an important trait to acquire for future academic success. Turns out being bilingual or multilingual really works well with your kid’s brain, right?

This is one of the most amazing facts about learning a foreign language. Research and studies show that being bilingual can actually help in delaying memory-loss or dementia! People who are diagnosed with Alzheimer’s, but are fluent in more than one language, have a higher chance of postponing the onset of symptoms for it.

But will learning a new language confuse my child?

This is a common doubt that most parents have. While learning more than one language in the early stages of development can be a little confusing for your child, it is not a thing to worry about! Confusion between languages is not a sign of your child being unable to understand, it is a natural process of adaptation. Every new thing takes time to adjust, and so is the case with learning a foreign language. In fact, as your toddler progresses to higher grades of schooling, learning a second language will come in handy to improve reading and writing skills!

C for Classroom, C for Curiosity!