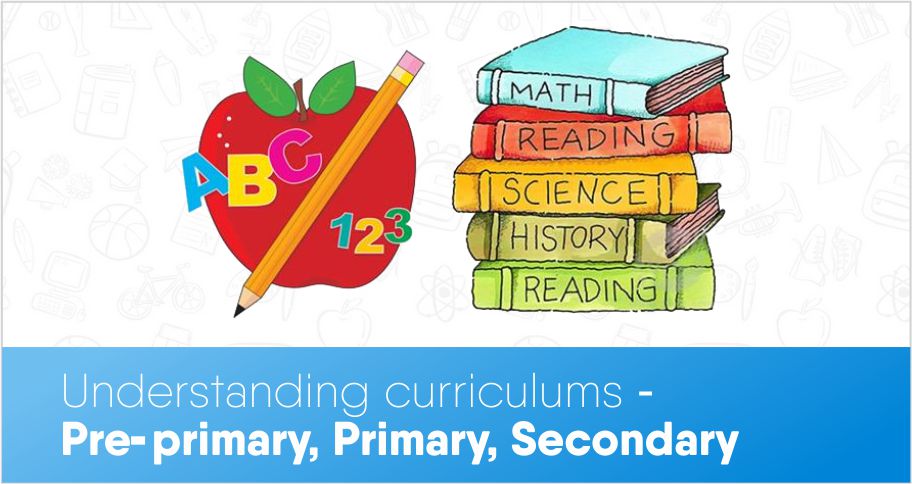 These are nothing but the fundamental stages that every child has to go through while studying in the Indian education system. Yes, by definition, this is the aptest and concise explanation of what pre-primary, primary, and secondary education is. But each curriculum has different teaching methods and styles.

Each child starts from the pre-primary stage and ends his or her high school education by completing and passing the higher secondary board as per the authorities’ grading system.

If we go by the book, this is it, and there is nothing more to discuss or say about it. But if we go by concern and curiosity to understand what these stages are, how they are different from each other, and how they shape each student for the better part of their lives.

The Pre-primary is also called the Kindergarten in India; the term was first introduced by Mr. Friedrich Frobel in 1837, which literally means children’s garden.

That was just the start of it, and now there are thousands of pre-primary schools in India, with the number of students ascending with each passing year. Pre-primary education or Kindergarten schooling is said to be an unavoidable part of learning for each infant as these are the first steps towards a whole world of knowledge.

In such schools, given that the children are tiny in age, the faculty hired are trained teachers as well as a good caretaker, people who do not get annoyed by children and understand them, to love them as equally as they are in their homes.

These schools are often called playschools because keeping in mind that children will be spending a lot of time there. The facilities in such schools include a large area to play with toys and swings and rides. This may seem a little too much, but pre-primary education is a must thing for your child.

The preschool tutelage in India is classified into two stages

The importance of pre-primary schooling has been steadily rising in society, and much weightage is given to it by the education policy of India. In recent times, the Pre-primary education chain is booming as parents tend to send their wards to fancy and celebrated playschools with lots of facilities and scope of learning.

This is the stage where a child or a small kid is introduced to education and schooling.

In the past decade, India has made its way to sincerity towards formal education and improving its literacy rate.

In the year 2016, Kerala has declared the first Indian state with a 100 percent literacy rate, which was a significant achievement for Kerala and India.

Though mixed reactions have been received from the public and parents about the quality of learning, also there are government reforms to amend it.

The classes are conducted as per a time table, and students are promoted only after passing the annual exam of that particular class.

Improving the quality of education is one of the most talked-about agendas of all the government, whether it is central or state. Each phase has its own syllabus. This is the formal education where every person should have to call him or herself literate.

These are the pillars on which you will be selected and choosing the stream of your interest in higher secondary.

The Secondary Stage, commonly known as high school, consists of classes 9th and 10th. However, the higher secondary stage of a school comprising classes 11th and 12th (10+2 pattern). The secondary curriculum comprises Mathematics, Science, Social Science, English, Hindi, or the regional language of the particular state.

These two years can be categorized as the concept-building years of schooling; the syllabus is vast and challenging. Students come across a sincere change in the pace and level of toughness in these years; algebra, trigonometry, physics, chemistry, and other comparatively complex topics are introduced to them in these two years. These two years actually give shape to the students’ minds as to how deep they can think and how fast they can be in calculating and understanding.

Students in high school learn a lot before coming across the secondary syllabus, which itself is a different story altogether.

After the student successfully passed the tenth standard, he or she may choose a particular subject they want to complete their higher secondary education in. There are mainly two choices given to the students, either they choose science or may opt for Commerce. This decision is taken very seriously in the Indian household and matters most to the student itself. If the student wants to become a doctor or an engineer, they go with the science stream, or if they are good with management and accounts, they choose Commerce.

After high school, the higher secondary stage is considered to be the last phase of schooling, and after that, the students attend college most commonly in the stream they choose after 10th standard.

All the three phases of Indian education have their particular importance and consist of their separate curriculum. These phases are followed in almost all the states and in the union territories of India.

Every year hundreds of parents and thousands of students hassle over the thought of which school, which board, which stream their child should go to. Schools, academics, and subjects are given foremost importance in the Indian households, Though it had been a notion in most of the Indian families that they want rather force their children to pursue Engineering and medical sciences, not giving their vocation and abilities a chance to grow. Still, in recent years a subtle change has been observed among the thinking of parents, which is a good sign.

A parent should never do that and let the child choose for themselves. Only then will they be able to score and grow more.

Though there are undeniable loopholes in the Indian education system, all of that can be eliminated with continuous efforts. Also, one should focus not only on them but also on society as a member and work to bring the change we speak of so boldly.

Having said all this, we hope you understand the importance of pre-primary education, primary education, and the difference between them. Also, how the Indian education system and curriculum works and operates at each school level with a different syllabus.