Using Technology During Mealtime Is Harmful To Children 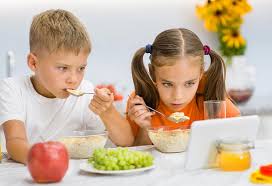 Teaching children to eat well and on time can be pretty tricky. While it’s easy in the beginning as the baby is only on milk, however, as the baby grows up and starts on food, it can get overwhelming and challenging for parents to feed them.

In a study titled “Cognitive Distraction at Mealtime Decreases Amount Consumed in Healthy Young Adults: A Randomized Crossover Exploratory Study” done at the University of Illinois, researchers said that using technology during mealtime may lead to decrease in the amount of food a person or child eats.

According to the researchers, it’s a misnomer that distracting kids during mealtime may make them eat more. The fact is otherwise. The child ends up eating less food.

A shorter version of the study is available on the university website as a news article.

Here’s a list of disadvantages of using mobile phones while eating. Note that this true for both babies and grown-up children.

Mobile phones or any technology can be addictive for anyone and more so in children. while adults can resist their urge to use technology, children find it difficult. When children are introduced to mobiles while eating, they think that it’s an incentive for eating. They make it a habit from which it’s hard to come out and most children won’t even bother to escape from it.

Early childhood is the time when children should be engaging in meaningful and creative activities that can develop their brains and improve their thinking abilities. However, with mobiles, these things take a backseat and children suffer as a result.  You must also know that mobile phone addiction can lead to other issues in children’s learning and growth.

Unlike adults, children’s eating habits are quite different and are dictated by several factors including taste and looks of the food. When children are around devices, they are engrossed in them and don’t get the urge to eat. The links shared above will also shed new light on how and why mobiles /technology are bad for children during mealtimes.

Allowing children to watch TV or mobile or even playing with toys is a sure-shot way to distract their attention from eating. Screen distractions have two negative aspects: 1. Eating less as mentioned above and chewing less. When children are watching a show or playing a game on a mobile while eating, all his focus is on the screen and less on chewing. For all you know, the child might just not chew his food or might not know that he is chewing less as his attention is completely on the screen.

In all probability, he is also not even listening to his stomach. Children have a hard time focusing on their meal with fewer distractions let alone a device playing their favorite cartoon in front of them. The same is applicable for toys and playing with friends or siblings during mealtime.

Children know what is going on in front of them and it’s difficult for them to that device a miss. It’s the parents, more than the kids, who are more distracted by the fact that their children are using mobiles. Even if you try to give your child your best attention, in all probability, it’s not going to work. While your child is eating, all they need is as much positive interaction and attention from you as possible. You need to ensure that they see the meal-time as a family bonding time.