Amazing things you should know about the festival of colours- ORCHIDS
Job Alert : To view our Careers Page Click Here X
(+91) 8-888-888-999 info@orchids.edu.in

HOLI – CELEBRATE THE FESTIVAL OF COLORS 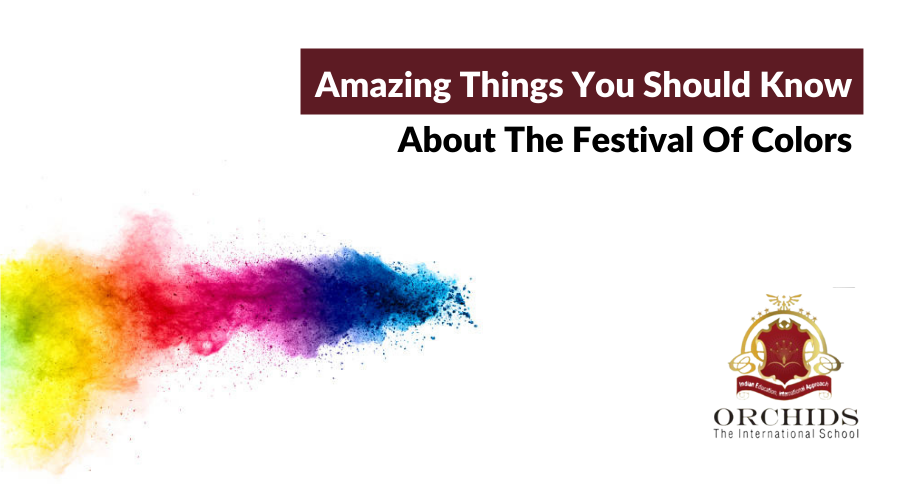 Holi is a bright, refreshing Hindu spring festival of colours. Many legends exist around why and how Holi came into existence and is celebrated every year without fail.  It was observed for the very first time in India way back in time. Holi is known as the “Festival of Colors” as all those who celebrate it play with each other with colours having fun on this exhilarating festival. People also love calling this festival of colours ” festival of Love” for many reasons! On this particular day, all loved ones, including neighbours, family members, and friends, come together, letting go of everything negative and unpleasant and enjoying the festival together with love, affection and warmth. The vibrancy of different colours used in different forms, including water balloons, powder, pichkari etc., is very refreshing and enjoyed by adults and more by children and toddlers.

Holi is not just a festival of colours but also has a vital significance in the Hindu religion, as symbolised by Holika mythology. Legends say that Holi was earlier known as ‘Holika’. It is said that Holi has been celebrated by humankind centuries before Christ came into existence. An extensive literature about Holi’s origin, rituals, and customs are found in early religious works such as Jaimini’s Purvamimamsa-Sutras and Kathaka-Grhya-Sutras. Initially, the festival of colours was also celebrated to commemorate Radha Krishna’s eternal and holy love. Holi is also important in Hinduism because it signifies that good will always win over evil irrespective of how powerful evil is. It celebrates the triumph of victory Lord Vishnu over Hiranyakashipu.

Alt-text: holi increases affection with each other

One night before the actual day of the Holi celebration, people congregate near bonfires to celebrate while singing and dancing on a local folklore in a festival of colours called Holika Dahan (burning of Holika) or also frequently known as Little Holi. The Holi festival of colours is also depicted in sculptures on the walls of historical temples. A lively scene of Holi is also found to be in a 16th-century panel sculpture located in a temple at Hampi, Vijayanagar’s capital. The picture shows a Prince and Princess standing among attendants holding syringes or pichkaris ready to immerse the Royal pair in the coloured water.

All those celebrating Holi begin gathering wood and inflammable goods for the bonfire in parks, community centres, near temples, and other open spaces days before the event. The sculpture of Holika surrounded by fire can be seen at the heap top. People load up on pigments, food, party drinks, and festive seasonal meals like gujiya, mathri, malpuas, and other regional specialities inside their houses. Children, toddlers, teenagers along adults join groups to colour their targets usually their friends, peers, neighbours and cousins using dry colours, coloured solution and water pistols (pichkaris), water balloons filled with coloured water, and other inventive and thrilling methods. All colours are present during the celebrations ranging from bright pinks to vibrant greens. Washable natural plant-based unharmful colours like turmeric, neem, dhak, and kumkum were the only colour extracts used for these traditional customs and celebrations. But with time, commercial water-based pigments replaced the old healthier colour extracts and are now becoming more popular.

The celebration of the legends and stories of the festival of colours reminds people of the strength and significance of truth, as the moral of these traditions is the ultimate, inevitable victory of good over evil. The thrilling festival of colours also teaches us that God always accepts his faithful follower into his shelter. All of these legends encourage people to live morally upright lives and to believe in the virtue of honesty. This is especially vital in today’s world when so many individuals engage in unethical behaviour for monetary gain and torture those who are truthful. Holi encourages individuals to trust in the virtues of honesty and truthfulness and battle evil.

Holi is also a celebration of forgiveness and new beginnings to promote social harmony through rituals. People clean up, wash and bathe, sober up and dress up in the evening after a tiring day of colour play. What is more exciting and thrilling about this festival of colours is that families along with children and parents go and greet friends and relatives by visiting them and exchanging sweets and gifts.

Holi contributes to the unification of society and the strengthening of our country’s secular foundation. Non-Hindus also participate in the festival of colours since everyone enjoys being a part of such a colourful and joyful event.

Furthermore, it is a Holi tradition that even rivals become friends on Holi, letting go of any feelings of misery that may exist. Furthermore, there is no distinction between rich and poor on this day, and everyone celebrates the festival of colours together in a spirit of unity.

You can also read:

How to determine the best age to start kindergarten