Why radio is still the most powerful medium 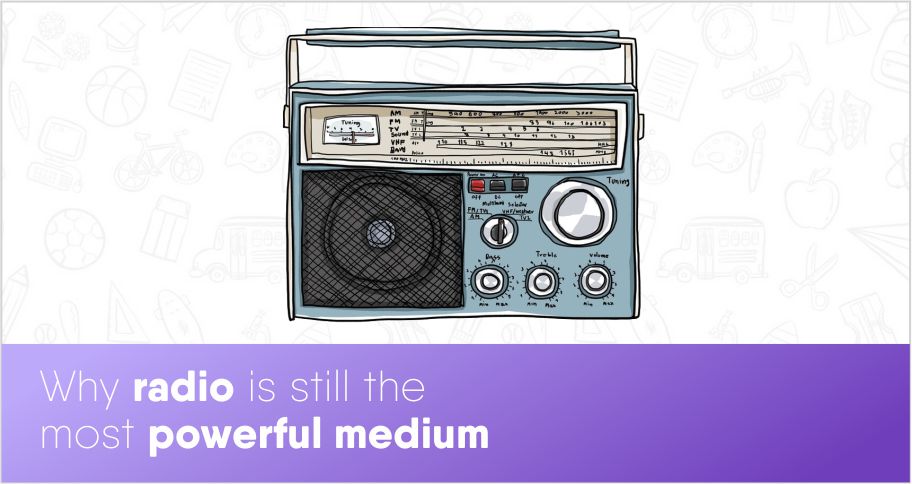 For many, listening to the radio would seem like the pastime of grandmas as they knit sweaters. The idea seems obvious, right? Who would, in this age of Facebook, YouTube, and constant bombardment of news feeds, has the time of the day to listen to the tech of the crochet-loving pensioners? Well, it seems like a lot to do. Radio is not only relevant and important but also still considered to be the contending champion of the entertainment world, if not the undisputed king.

Though preferred by long-haulers and cabbies, it is not uncommon to see a radio playing in the backgrounds of gas stations and grocery stores. Other people who work in remote areas, like forest officers, military personnel, miners, sea voyagers, even scientists exploring the depths of the Amazon or the icy desert Antarctica, rely on radios for communication and sometimes entertainment.

So it is safe to say that radio is infallible and not going out of style anytime soon. ‘Why,’ you ask?

Our species is notoriously famous for our imagination. And nothing feasts a human’s mind eyes as much as the imagination does. The power to ponder over something, visualizing it in our heads, solving a problem, or conceiving something, is, in fact, our most unique characteristic trait.

However, this unparalleled ability atrophies when we get our dose of entertainment from the TV. Because duh, TVs show us what needs to be seen rather than nudging us to imagine. There is a reason that televisions have a rep as mind-numbing. This is a predominant reason that books are still extremely popular and successful.

Next to books, radios have the unique ability to kindle our imagination prowess. Unlike eating chips and sinking into the couch, watching TV, radios make us want to visualize stuff. Getting lost in that world is a distinctive feeling which any visual medium of entertainment simply can’t serve.

Radio is omnipresent. Okay, I’m exaggerating; they are not. But no medium of entertainment is as pervasive as radios. From the remotest region of the Himalayas through the Siberian tundra to the African Savannahs, where accessing the internet is problematic, to say the least, radio is a staple for entertainment. As remote areas tend to be, well, isolated, radios are sometimes the only way to contact the people living here in case they need to be warned about something like a snowstorm or a prowling tiger.

From the day they were launched and began entertaining us, radios never asked us to spend a lot. Maybe the occasional battery, but nothing more than that. YouTube is free, but technically you have to have a data plan to enjoy it. But radios don’t need the internet for them to work. Radios always have been and will be free for the foreseeable future.

What is social media, if not a conduit for us to broadcast our thoughts, a device to express our comments on some particular issue? Radios were helping to do that way before Twitter did. Forget calling the DJ and talking to him; we used to send letters to the broadcasting station even before the widespread use of telephones. Radio personalities not only read them on live air but also remember you if you are a regular fan. Isn’t this exactly what social media does these days, albeit with an additional advantage of monumental haste.

Due to the cheap cost of advertising through radios, many companies, from startups to big conglomerates, capitalize on the broad reach of this powerful device. Governments across the globe still use radio as a means to issue warnings or about beneficial schemes tailored for the poor part of its populace who are not unknown to have a hobby of listening to radios.

Indulging in visual entertainment is dangerous while driving, period. But dishearteningly, some irresponsible among us watch YouTube or movies when they drive long distances. This menacing practice puts not just the lives of that particular wrongdoer at risk but also the innocent civilians.

But there is no malevolent forethought in the minds of the drivers who do this. They are just bored during their fifteen-hour drive and want to entertain themselves with the same thing they use at their home: videos or movies.

Thankfully, listening to radios can put a stop to this. An additional benefit is by engaging the listener to actively imagine something, radios keep boredom out of the drivers’ eyes, hence helping them stay awake. Any professional long-distance driver can attest to this.

It is a con mainly for the hearing impaired. As there is no way a sign language can be shown through radios, it is completely useless to people who can not hear.

Compared to other mediums of entertainment, or infotainment, radios lag behind in terms of channels. Take, for example, YouTube. There are thousands of options for the younger generation to explore. Even TVs have hundreds of channels. But radios will offer at their best a dozen stations, maybe two. This will hamper the posterity to turn away from radios, as they are known for having their options limitless.

Radios are free, so their repository of songs and albums are limited. They are known for repeating some songs as well. This deficit will discourage the music heads among us from choosing radios.

Are radios for everyone? They may not be. An avid music listener won’t find radios more interesting than Spotify. The hearing impaired or people who prefer to have their channel options will not find it beneficial, too. But is radio still the most powerful medium of entertainment? Absolutely! Its tendency to engage the listeners, some of whom might be from the remote parts of the world or just drivers pulling double shifts, and its advantage of advertising cheaply to a broader audience, makes it relevant even today.