Home » Blog » Days and Festival » Why is the 11th of Feb celebrated as International Day of Women and Girls in Science?

Why is the 11th of Feb celebrated as International Day of Women and Girls in Science? 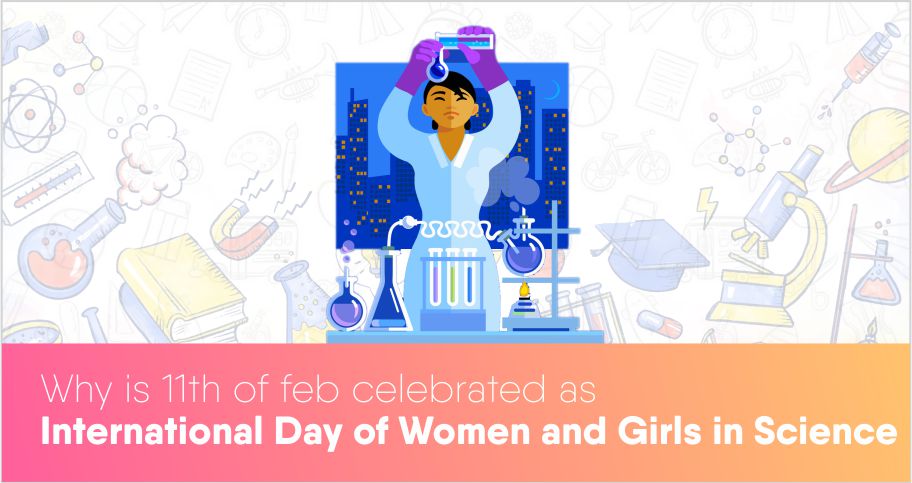 Why do we need International Day of Women and Girls in Science you might ask? Male chauvinism, dominance, patriarchy, sexism—just to name a few forms of inequalities women face today. So it will not be an overstatement to say that every woman has firsthand experience in some type of injustice directed at them. Third-world countries are the worst when it comes to women’s rights. Not only are women in science prevented from pursuing their dreams and ambitions by going to colleges, but they are also forced into marriages they don’t want, to have children they don’t need, and then economically ostracised, made to depend on their partners.

But what are women, if not queens of fortitude? Thousands of women beat seemingly impossible, and undoubtedly improbable, odds and achieve great things. In the tumultuous competition among men, some women fought and made their voices heard. With sheer grit, hard work, and perseverance, they have reached monumental heights that most men can only fantasize about. Before learning about their contribution to science, let’s first know how the International Day of Women and Girls in Science came about.

It was the United Nations General Assembly’s 70th session. In this gathering, the famous ‘Sustainable Development Goals’ was passed, which is a list of 17 interlinked global goals that serve to be a “blueprint to achieve a better and more sustainable future for all.” The theme of that year’s session was “A new commitment to action.” True to their theme and a new goal, on December 22nd of 2015, the United Nations General Assembly passed a resolution named A/RES/70/212. UNESCO and UN women implemented the International Day of Women and Girls in Science, and it was declared to be celebrated on February 11th every year. Institutions around the globe and civil society partners collaborate and strive to obtain unbiased opportunities for women in science.

However, the participation of women in STEM fields is not equal to that of men. Only around 30 per cent of researchers in the world are women. In engineering-related areas, their enrollment is just 8%, and in maths, it is a bleak 5%.

But this data is still better than the last century where women had to fight even more challenging odds. Let’s look at some of these warriors of the bygone era.

There is no way I can start off this fantastic list for International Day of Women and Girls in Science without the mother of radioactivity herself. And no, I was not exaggerating when I said the ‘mother’ of radioactivity. She coined the term, after all. Born as Marie Sklodowska to poor parents in Poland, she obtained her rhyming surname after marrying Pierre Curie. With her attitude of never giving up in the field of chemistry, this researcher discovered Polonium and Radium. This paved the way for the discovery of many pieces of equipment that are used for diagnosing and treating cancer. A fighter till the end, she was known for working even when she was dying of radiation. The same radiation she discovered to the betterment of humanity. A classic example of a scientific martyr.

Known for working in the infamous Manhattan Project, this Chinese-born experimental physicist’s colossal contributions actually lies in the disproving of the ‘principle of conservation of parity.’ Even though she led the team of this project, only her male colleagues went on to win Nobel Prizes while she was unrecognized. However, we will always remember her as ‘First Lady of Physics.’

An ardent lover of everything space, she finished her early education at Cambridge University. But sadly, in the 1920s, it didn’t matter if a girl completed her course or not. Either way, they weren’t granted a degree. However, with a passion for exploring the never-ending universe, she travelled to the US and became the first person to earn a doctorate in Astronomy from Harvard. In the same university, she became the first woman to head the Department of Astronomy. Her curiosity about the stars and her eventual pursuit did not go in vain. Because she finally discovered what stars are made of and shared the secret with the world.

Unlike the previous entries, Katie’s contribution to science is still ongoing. She did what was thought to be impossible—photographing the all-powerful but incredibly elusive blackhole. I mean, how do you even take a picture of something that doesn’t even let light escape its gravity. The light that cameras use to photograph something. If you’ve discovered an answer to this paradox, then you are two years too late because Katie already beat you to it.

One blog isn’t going to cover all the women in STEM fields who contributed or still contribute aplenty to science. Even ten encyclopedia-sized books aren’t going to be enough. While it is important to learn about all of them, there are other women in different fields who achieved tremendous things in the world, too.

The author of Pride and Prejudice was a tragic one. Though she is one of the most influential figures in the literary world, she never got credit for her works when she lived, publishing her books anonymously. But now, the whole world knows and rightly celebrates her ingenuity.

Describing her contribution as ‘God’s work,’ she dedicated her life to the betterhood of poor people. She also started the ‘Missionaries of Charity,’ which receives contributions across the world, who still carries on the mantle Mother Teresa lit and helps the poor.

It is clear that women and girls are not just going to help change the world but be the reason for it. Some women dedicate their lives, some literally give their lives, for science and the betterment of humanity. To try and prevent their passion and extinguish the fire inside them is nothing short of an exercise in futility. They have proven time and again that they are in no way less to men. So it is our duty as the posterity of yesterday and the history of tomorrow to fight for their right to education and involvement in science. Let’s make sure every day becomes an International Day of Women and Girls in Science in our world.

A Sneak Peek Into The Mind Of A Four-Year-Old

Are you aware of the car safety measures for children?