How to recognize and help a teenager with Body Dysmorphic Disorder?
Job Alert : To view our Careers Page Click Here X
(+91) 8-888-888-999 info@orchids.edu.in 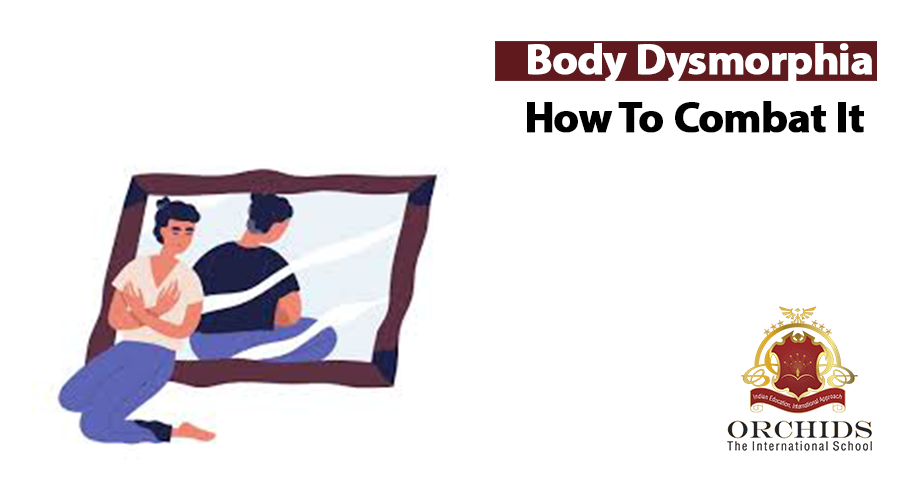 Have you ever tried to fight with a zit, squeeze it, pinch it, and try everything to wipe that minor inconvenience off existence? But to your horror, you discover that your desperate attempts went in vain. Distraught, you go to the office the next day, only to find out that no one has even noticed it. This is when you question your perception of self. When you tell your friend about the zit, they gawk at you, stupefied, and ask, “What zit?”

Finding “flaws” in a perfect body and being a worrywart about it is something we have all faced one day or the other. It might come out as vanity, but I can assure you, it most certainly is not. This behavior, though purely psychological, doesn’t make it any less strainful. It has a name: Body Dysmorphic Disorder.

Adults aren’t the only people who suffer these supposed flaws. Kids, particularly adolescents who just battled puberty and step into teenage, are at the risk of

Like many psychological illnesses, there is no evidence to suggest that a particular thing causes Body Dysmorphic Disorder. But certain factors are believed to heighten the risk of developing it.

As you might have noticed, Body Dysmorphic Disorder is slightly overlapping on the symptoms of Obsessive-Compulsive Disorder. If a kid’s parent or first relatives suffers from OCD, there is a good chance that he/she will develop it. Body image issues can also be due to societal pressures

This personality trait gets both positive and negative rap. But we are not here to debate that topic. What matters is that if your child exudes perfectionism, there is a chance that they would suffer BDD, too.

If your child hangs out with a group whose hobbies/pastimes relate to something physical, like modeling or bodybuilding, then there is a little chance that your child might see himself/herself less attractive.

It is not uncommon for children suffering from anxiety and/or depression to develop BDD. However, the medications they take for such conditions, if they take any, would alleviate the symptoms of BDD, too.

Maybe someone called your child a name based on their looks. And it has always stuck with him/her. So they try to “cure” this “flaw” by continually thinking about it. This is yet another reason bullying destroys lives on multiple levels.

Kids with BDD tend to check mirrors a lot. Not just mirrors. Even shiny surfaces or reflective glass facades give them a pause to check their appearance. Since Body Dysmorphic Disorder is less about vanity or more about the ‘I don’t want my looks to bring me a bad name’ kind of thing, it is the fear that motivates them, not the pride in their appearances.

Your child might always feel ugly, and society will ostracize them if they continue to look that way. Some adolescents with Body Dysmorphic Disorder genuinely believe they have a flaw. If you suspect your child is suffering from BDD, call their best friends and ask them if your kid has ever expressed dissatisfaction about the way they look. Since kids are more comfortable talking to their friends rather than their parents, your teenager’s bestie is far more likely to know about their quirks than you do.

Since kids believe that some part of their body is hideous or unworthy for the public’s eyes. This is where body image issues come into play. They would try their absolute best to cover up those places. A boy with a facial scar will grow a beard, or a girl who thinks she doesn’t have a pretty face will cover it with long hair. Similar actions of covering their bodies can be a sign of budding ODD.

Due to Body Dysmorphic Disorder, now your teenager is an ardent believer that they are ugly, so they are unwelcome. To save themselves from this supposed embarrassment, they won’t go out to parties or other social events.

In some truly extreme cases, a teenager suffering from Body Dysmorphic Disorder will take the ultimate decision: to operate the ‘ugly’ body part away. Some disturbing deformations may occur during or after such surgeries, which would make their fantasized problems into real ones.

If you are to find out that your kid suffers from Body Dysmorphic Disorder, there are a lot of ways you could help. Apart from the usual stuff ‘you are beautiful’ or ‘don’t worry; it’s nothing,’ try to listen to their side. The last thing they need is their parents treating them like they are crazy.

Engage your teenager in a debate about the concept of ‘beauty.’ In fact, start the argument by blatantly disagreeing that there is no such thing as beauty. Your kid will do his/her absolute best to prove you wrong, but as you list out various points to show them that beauty is a social construct and it is in the eyes of the beholder, they will begin to wonder. If they start to believe that beauty doesn’t matter, then BDD can’t ever break them.

You have exhausted your energy by talking to your child, and still, it didn’t work out? Then take your teenager to a psychologist or even a licensed social worker who specializes in children. If your talks aren’t doing the trick, maybe a stranger’s will.

If psychotherapy is not working, then it is time to up the game. The psychologist will ask your kid to do small exercises to help them feel less anxious about their looks.

When it is time, the psychologist will ask you to take your child outside. But the rule is, they should not use makeup to cover their “flaw.” The kid should just come to terms with the fact that no one even cares.

This is the last resort, but it can help, too. Medications used to calm the mind from conditions like anxiety or OCD are used to treat Body Dysmorphic Disorder. This can combine with psychotherapy and behavior therapy to truly help your teenager come out of BDD unscathed.

Body Dysmorphic Disorder is a chronic condition. But with a little training and help, it can be suppressed, except maybe a few occasional bouts three or four times a year popping up. However, if you have equipped your teenager with the knowledge about their condition and what they can do to help themselves, they would get stronger and stronger, one day forgetting that they have this condition altogether.