How To Help Your Child In Fighting With Bad Habits 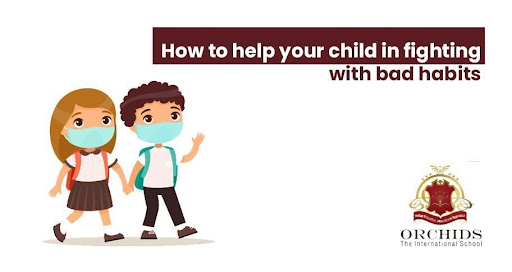 A habit is a pattern of action that is done over and over again, and the child who is performing it is usually unaware of it. While children are blissfully ignorant of a habit, their parents are not so fortunate. Don’t be astonished if your child has one hand put in his or her mouth and the other entwined in his or her hair on a regular basis.

The following are the most prevalent habits among children and teenagers:

Some youngsters have been observed throwing tantrums, particularly when they want something and their parents refuse to give it. However, this tantrum might sometimes turn into a nightmare for you. The parents should leave the situation. Don’t scream at them; instead, take a break from chatting and refuse to give in to their excessive requests.

Aggression in children is a bad indicator. When their parents are not there, children commonly pick fights on the playground or at school. Children who are aggressive are ones who are constantly seeking attention. When a parent or school receives a complaint, it is critical for parents to determine the source of the hostility. Do not begin to strike your child. Sit down with your youngster and talk about what’s going on. It’s time to step in if your child is watching violent movies or cartoons. Engage him in a useful activity that will allow your child to express his or her emotions.

It’s not a good sign if you’re misbehaving with your grandparents and housekeepers. This is something that children learn from those around them, particularly their parents and older siblings. Set a good example by being courteous to everyone in their environment. From his parents, he will pick up the good behaviors of greeting and thanks.

As children grow older, they become more argumentative, and once they reach their teens, they begin to establish their own minds. Back-answering became a habit over time. Parents should address the issue early in their children’s lives because it can become a habit that leads to them becoming nasty and rebellious children.

If you’ve ever had your nails bitten to the nub, you’re not alone. One of the most prevalent childhood habits is nail-biting or picking. Between 30 and 60 percent of children and teenagers chew on one or more fingernails. A child may also bite his or her toenails on occasion.

In their early years, both boys and girls appear to be equally prone to the habit; but, as they grow older, boys are more likely to be nail biters.

If one of your children twirls her hair, chances are it’s your daughter. Girls are more likely to twist, brush, or pull their hair. Hair twirling can appear as a forerunner to hair pulling in early childhood, with or without hair loss. However, as people get older, many hair twirlers and pullers cease. Those who don’t can break the habit with some easy behavior adjustment.

Hair pulling is more difficult to break in older children or teenagers, and it might be an indication of anxiety, sadness, or obsessive-compulsive disorder (OCD).

Nose picking appears to be a practice that can last into maturity, despite the fact that it usually begins in childhood. If you don’t believe me, consider this: according to a 1995 survey of adults, 91% of them pick their noses on a regular basis – and roughly 8% of them ingest what they pick!

The thumb coming into contact with the mouth during newborn movements is suggested to be the reason for children’s preference for thumbs as a suckling finger. In addition to or instead of their thumbs, some children suck their fingers, hands, or entire fists.

Young children are the most common thumb suckers, with up to half of 2- to 4-year-olds sucking their thumbs. To relax and comfort themselves, many children suck their thumbs. However, thumb sucking after the age of 4 to 5 years old can lead to dental abnormalities (such as an overbite), thumb or finger infections, and being teased.

Understanding the Cause of the Bad Habits

Experts aren’t always clear what causes a habit, but they do know that it’s a taught behavior with a favorable effect for the youngster.

Habits can form as a kind of enjoyment for a bored youngster or, more typically, as a coping strategy to calm an anxious child. Try to remember if your child has just had a stressful situation the next time you observe nail biting or hair twirling. If that’s the case, the behavior could be an attempt by your child to reduce stress, similar to how you could relieve stress by going to the gym. Some children, on the other hand, engage in routines when they are relaxed, such as reading before going to bed or quietly listening to music.

Some habits may have been passed down from generation to generation. Thumb sucking is a widespread form of self-comfort in newborns, and it has pleasant connotations with feedings and the end of hunger. As a result of its good connections, it may endure into childhood.

Perhaps the answer to your child’s nail-biting can be found in the mirror. Do you have a habit of biting your nails? Nail-biting appears to have a substantial familial or genetic component, according to studies. Other children develop habits in order to gain attention or influence their parents. If children believe their parents are ignoring them, they may participate in the irritating behavior in the hopes of eliciting a response from Mom or Dad.

Coping With Your Child’s Habit

The good news is that most habits fade away by the time a child reaches school age, owing to the fact that the child no longer requires or outgrows them.

However, if you believe it is time to assist your child in breaking a habit, follow these steps:

This method can be used with children as young as three or four years old to help raise awareness of the situation. Something along the lines of, “When you bite your nails, it bothers me. It does not appear to be attractive. Could you perhaps refrain from doing so?” Most importantly, don’t chastise or lecture the next time you notice someone gnawing their nails. Punishment, ridicule, or criticism may lead to an increase in conduct.

If your 5-year-old comes home from kindergarten crying because the other kids teased him about his thumb sucking, see it as a request for assistance. Parents can inquire as to what their children believe they could do to break the habit or whether they desire to break the habit. Come up with some ideas for how you and your partner can work together to break the bad habit.

If your youngster bites his nails, for example, instead of saying, “Don’t bite your nails,” say, “Let’s wiggle our fingers.” This will help you become more aware of the behavior and may also serve as a reminder. Provide a distraction, such as helping you in the kitchen or working on a craft, to keep your child’s attention occupied.

Allow your child girl to wear nail polish, for example, if she allows her nails to grow. Alternatively, whenever your son refrains from sucking his thumb, praise him and reward him with a sticker or other little prize.

If you don’t pay attention to positive behavior, it will fade away over time. Before the old habit vanishes, the new, positive one must be firmly formed.

It is critical that children be motivated to stop the habit in order to achieve the best results. And, because habits take time to form, it will take time for them to be replaced by new behaviors, so be patient.

Children adopt bad habits easily because of various reasons. But if those habits continue for long it will create problems in their personality development and in their overall growth. With the tips mentioned above, you can ensure that your child can fight with his or her bad habits and defeat them gracefully.

Top Ways You Can Help Your Child Be a Confident Learner