Why is Early Childhood Brain Development So Important? 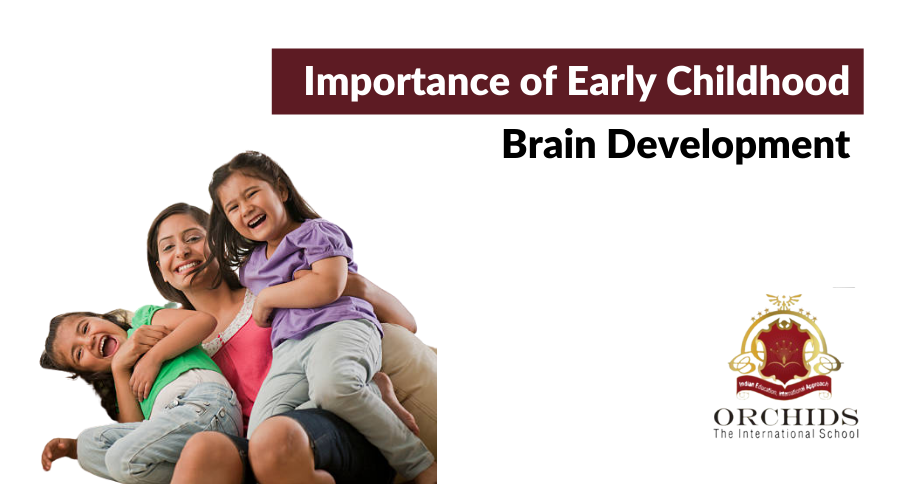 What is Childhood Brain Development?

Early childhood brain development. The most important time for new humans to become fully developed. If a child is given proper nourishment, both physically and psychologically, it will sure make the child succeed in life. And malnourishment is either of those will result in the child becoming weak, physically, or mentally.

The newborn’s brain is only half the size of the fully grown adult, but by the age of three, it would have grown to ninety per cent. Though the volume of neurons (brain cells) in a newborn’s brain is similar to that of an adult’s, the neural connections between these brain cells (synapses) are fairly higher in an adult’s brain. These connections are what we called learning. Any kind of learning, be it talking or walking or mastering quantum physics, synapses are formed. And science has shown that almost a million synapses are formed each second in a newborn’s brain. It is backed by research and empirical evidence that childhood brain development is one of the crucial stages in their lives, if not the most.

So what can you as a parent do to encourage childhood brain development? It is really simple.

Spend Quality Time with Your Child

The first thing the parent or a caregiver should do is spend an awfully lot of time with the child. Humans are social animals. It is impossible for a little human to survive long enough to become a big one without an adult’s intervention. The relationships they form with adults play a vital role in childhood brain development.

Mothers obviously come first. The newborn will form synapses even from something as basic as feeding or cooing when they cry. The child gets used to the mother’s voice, and when they do, brain connections are formed. When the mother hugs a child and sings a lullaby, the child learns their mother’s voice and smell. As these are two completely different sensory organs–nose and ears–they form a million synapses during this time.

But mothers aren’t the only people who interact with a child. Any form of relationship a child develops is a learning process. So if you work two jobs, and are a single mom, make sure the caregiver is patient and nurturing. Be it a neighbourhood’s teenager or the child’s grandma, that person should be patient and attentive enough to tend to the child’s needs.

And the child’s need is no way near fulfilled just by feeding them and tucking them in. The adult should constantly stimulate the child. For many adults, stimulation is playing video games or watching a good flick. But infants haven’t yet reached the mental capacity where they can enjoy either and feel stimulated. For them, the world is new and strange. So even giving them a piece of plastic cover or a TV remote is stimulating enough.

Apart from the nurturing benefits of spending time with children, you also can be sure that the child is safe and sound.

HOW You Spend Time With a Child

You might have guessed that this is going to be the next point because it is true. The quality of the time spent with the child is equally, if not more, important than the quantity. A newborn is, for all intent and purpose, a blank sheet of paper. You have a lot of things to teach them. When they learn to talk, it is important to make sure that they don’t stutter on a particular syllable. If they do, a few exercises to strengthen their vocalizing ability is in order. When they learn to walk, we need to be certain that they don’t hurt themselves by falling from a critical angle.

Apart from talking and walking, other things like empathy and morality can also be taught at this time. They can be shown how to share their food or to water plants. Discipline can also be nurtured at this time. A simple exercise in keeping things they took from where they took them will help them grow into an organized adult.

The quality also includes education. While it is a general rule that children do not concentrate in school at this age, it wouldn’t hurt to prepare them for it. The first day of school is the day when all children cry. So it is best you prepare them to leave one supervising adult to learn from the next.

But how do you prepare the child to be alone but also make sure they form a lot of synapses without your presence? Interactive educational toys. That’s how. We’ve already discussed the top 25 toys that will help the child in early development. Get them one of those. From learning the basic alphabets to solving small puzzles, they will all help the child in forming ample synapses in their brains.

When they are bored with the toys at home, and you are already exhausted from doing all this, fret not. Because this is the time, the child begins to interact with other people, little and big, at schools. This will provide them with a whole new environment, hence a whole new learning ground. Nursery and kindergarten teachers are the best mentors a child would ever get, though many of us don’t even remember such people. These trained professionals help the childhood brain development with education and play while also making sure that they behave in a socially acceptable way.

So this is it. When a child receives proper company that is more than adequate to develop his/her brain. If you give the child a lot of quality time, and they will grow into a great human. Also, keep in mind that boredom or isolation will have a negative impact on childhood brain development. But it is not even remotely hard to keep a child entertained, for the new world is new to them. Anything insignificant to adults, like a paper cup or soda cap, can kindle a child’s brain and help in forming synapses. So in a way, if you pay attention to the child’s mood, that is enough.