10 Fun and Interesting Facts About Stars and Outer Space 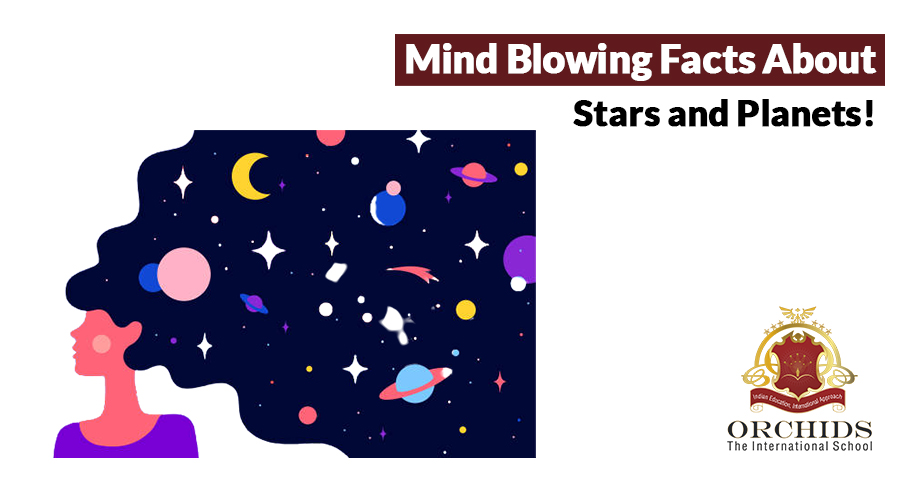 Reaching Out to the Stars

While science has made many revelations over the years, outer space still needs to be understood and explored. The recently released images of the black hole observed for the very first time left us spellbound, making us realize the infinitely small nature of our existence in the Universe. The concepts, ideas, and images of the astronomical world have an all-inclusive intrigue, marvel and are in sync with human inquiries. This far-reaching enthusiasm can be tapped by feeding your kids with  fun facts about space, stars, and other celestial bodies.

Integrating astronomy for kids from elementary levels will help contribute to the inquisitive nature of kids. Astronomy as a subject for kids will teach them fun facts about stars or fun facts about space and probe and light up this notion of the scientific world. The interdisciplinary nature of the subject that links it with core sciences and technology will extend your child’s abilities in giving back to the world by making significant contributions in the arena.

On the off chance that you want your child to become familiar with space and astronomy, there is much more you can do other than just purchasing space outlines and toys. However, you cannot be risking this opportunity by exhausting your child into getting educated about astronomy. Hence, you need to be smart to capture your child’s interests.

Astronomy For Kids – Interesting Facts About Space for Kids

Space is an exciting frontier with a lot to investigate!

Astronomy for kids as a subject at the school level can fuel youngsters by instilling in them the thrill to unravel interesting space fun facts. The wondrous and mysterious nature of the Universe can kindle a sense of intrigue in kids by leaving them spellbound seeking answers to questions like: How did the Earth appear? What comprises the Universe and outer space? Does the Universe end?

Regardless of age, Astronomy astonishes and moves us all! We know almost a fraction of a whole about our Universe. The craving to investigate the obscure releases the inquiries and stirs interest in youngsters. Kids love to discuss stars, moons, planets, supernovae, comets, and space rocks. Addressing and pondering prompts more inquiries and lets kids reveal their internal research.Astronomy for kids as a subject in school is likely to arouse enthusiasm for Science related subjects like physical sciences, mathematics, and the sky’s the limit from there!

Who knows, your inquisitive child who is learning fun facts about stars today might become a world-famous aerospace scientist shortly.

5 Facts About Space you Must Know

There is so much beyond the blue planet earth- solar systems, suns, planets, moons, and stars. Getting your child to show fun facts about the space is not a very daunting task as the space in itself is so spellbinding and fascinating. Introducing astronomy for kids by integrating fun facts about space or model assignments around galaxies, solar systems, and other celestial bodies.

Start by spilling some fun facts about stars for kids who are interested in astronomy, such as :

1) One million Earths could fit inside the Sun – and the Sun is viewed as a normal size star.

2) The Universe is nearly 13.8 billion years old and has been expanding ever since the Big Bang.

3) Jupiter, Saturn, Uranus, or Neptune do not have a solid surface!

4) There are many stars known to mankind, more than the collective grains of sand on all the seashores on Earth. That is, in any event, a billion trillion number of stars.

5) If you could fly a plane to Pluto, the excursion would take over 800 years!

Interesting Facts About Stars for Kids

Regardless of whether you’re a parent or a teacher- showing your kids a starlit sky can help you pave the way to astronomy for kids. Take your children outside for a sound night of experiences- the sky is brimming with brilliant stars that are mystical in their way. Science has revealed a ton about our close planetary system however we are just near the precarious edge of understanding the sheer limit of the universe and past. Start sharing the pleasant realities of astronomy that cover fun facts about stars and facts about space, with your children to get them amped up for the subject.

Astronomy for kids will offer youngsters an awesome chance to appreciate the elements in outer space and expand their ability to question the unknown and mystical. Are you ready to inspire your child’s journey into the world of astronomy by teaching him fun facts about stars?

Every night stars appear to be twinkling. However, they aren’t. It’s the light of the star that is being refracted through the layers of the atmosphere and hence the twinkle.

Stars are formed from clouds of cold molecular hydrogen that gravitationally collapse. As the cloud collapses, it breaks into many pieces that form individual stars. All-stars comprise nearly three parts hydrogen and one part helium, with no trace elements.

While all the stars in the sky may look the same, they aren’t. One of the fun facts about stars is that their colors vary according to their temperature. Stars are observed to be of colors ranging from blue, white, yellow, orange, red, and even brown. The hottest stars are blue-colored, while the coolest stars are brown.

The most common type of stars among the billions of stars is the Red Dwarf. These stars weigh less than the Sun in mass and are smaller in size; hence the name dwarf. Red dwarfs burn slowly and hence live long. They are not hot enough, don’t shine bright, and eventually fade.

One of the fun facts about stars for kids will be the revelation that the sun is a star. The Sun isn’t huge and is one of the many dwarf stars.

Gigantic stars called the Red giants, or red supergiants, such as the star Betelgeuse, in the constellation Orion (20 times bigger than the Sun), can easily absorb Saturn’s entire orbit.

Dwarf stars can live for trillions of years before they fade. However, larger stars that are around a hundred times bigger than the Sun only last a few million years.

It takes millions of years for light emitting from the stars to reach our eyes, that is you are seeing stars from a long time ago. Looking at the night sky is like looking back in time 100,000 years.

The closest star, Proxima Centauri, is located 4.2 light-years away from Earth. It means that it will take light more than four years to complete the journey from Earth.

Astronomy for kids can be introduced in the form of astronomy books for beginners. These books that shed light on outer space’s world reveal fun facts about space or fascinating facts about stars and other celestial bodies. This will help channel enthusiasm regarding astronomy for kids while still retaining the intrigue of the tender minds.