5 Excellent Tips To Teach Kids About Rewards and Consequences 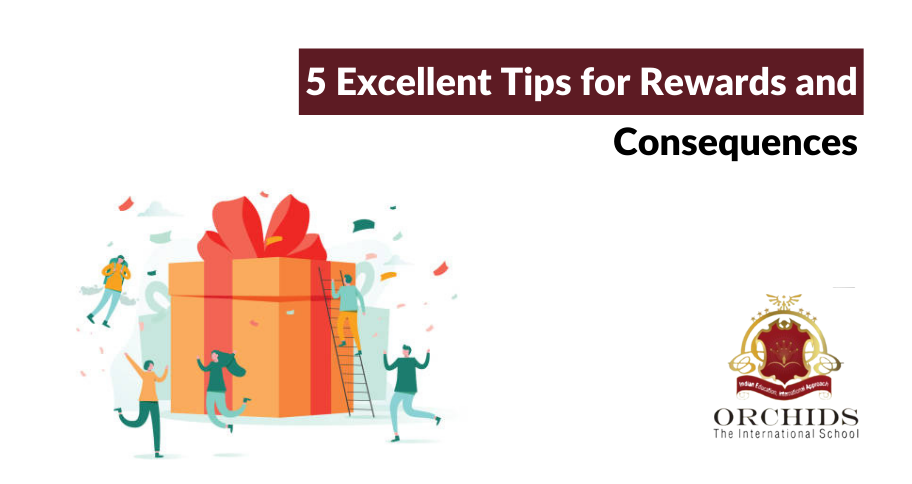 Rewards and consequences are a great way to motivate children. The rewards can be material, such as toys, or they can be rewards for good behaviour. For instance, if your child has been well behaved all day long and is not yelling at you or their siblings, then they might get the reward of an extra hour of screen time after dinner. With rewards come consequences for bad behaviour. If your child threw a tantrum in Target because you wouldn’t buy them the toy they wanted right now, then maybe next time you will say no when asked what’s wrong with it and suggest that they ask nicely instead!

Why Should Parents Stress Rewards And Consequences?

Parents should be aware of this concept because the rewards can help your child feel like they control their life. It is also important to have tips for good behaviour so that kids know what to do when you are not around!

According to a study, rewards can help improve behaviour and even academic performance. Some rewards are simple, like a pat on the back or saying, “good job!” So what about the consequences? Well, they shape your child’s behaviour. Following are seven practical tips for rewards and consequences.

7 practical tips for rewards and consequences

If you think buying your child an expensive toy is a reward, and the answer is no. Buying and spoiling a child will not improve their personality. A reward is positive feedback. It can be something that the child wants, but it doesn’t have to cost anything. Even if it does cost something, it must be equal to the effort the child put in. The reward must be earned by the child and not simply just showered on them.

Rewards should be given immediately

The big reason rewards work is that kids know they are getting an instant reward for good behaviour and want to repeat that feeling! The best way to do this is by giving rewards right away to show that tips are instantaneous.

When you procrastinate, kids will stop trying for rewards. If you want your child’s motivation to last throughout the day or week, make things work quickly.

If you have promised them something, say they finish their homework on time and ask them what reward they need. Children must have a say in, as rewards are something they work towards. But kids can be picky and ask for something way too expensive or not good for them. And so, limit the choices of rewards because they’ll realize that something is better than nothing.

State your expectations from them

If you want your child to grow responsible, say your expectations and be direct. Tell them to clean up when they play with toys, finish assignments, etc. When you state what they’re required to do, they won’t be confused thinking about what you expect from them. If they still don’t get why you need them to do it, tell them the consequences if they neglect it. You can tell them that the teacher will punish them if they don’t do the homework.

Consequences are not punishments

Despite how they may appear at times, punishments are different from consequences. They’re an excellent approach for your child to understand that life has natural results. This understanding can assist your child in structuring and organizing their actions. A consequence can be better understood like this:

Say your child promised to clean their desk in exchange for a plushie, but they don’t do it. So, the consequence that they’ll face is you withholding a previously agreed-upon plushie. But punishment is quite severe where the child might even receive a rude lecture. This is why consequences shape the behaviour while penalties might cause trauma.

Also, If you use rewards to make up for punishment, they’ll think of rewards as something negative rather than positive reinforcement. So, never do that.

Benefits Of Rewards And Consequences

Now that we saw how to maintain this, let us look at how they affect your child.

Rewards can build the parent-child relationship

Every time the child rewards him with a loving touch or praise, this will make them believe that they are already good enough.

Also, building up their sense of responsibility and independence is easier if you reward it every once in a while. This way, rewards become more than just something for the time being.

Your child will perform well at school

This is a common tactic that rewards are used for. This will give the child incentive to do well in school, and they’ll be more motivated than ever before to build up their grades because rewards motivate them from within.

Your child will fear doing the wrong things

This is a way consequences can be used to motivate your child. When they know that something wrong will cause them to lose their rewards, then they’ll think twice before doing anything terrible and won’t want to take the risk of losing their earned name as well.

Children are often looking for validation in what they do. This rewards and consequences method will give them plenty of that since they’ll be feeling proud about what they’ve accomplished as well as have been rewarded for it, too. Also, your child will feel like you care. This is because when you give them praises and gifts, they’ll think that you’re on their side. We would suggest you use this method appropriately because too many rewards can spoil the child, and too many consequences can pressure the child.

How To Deal With Nightmares In Children?

4 Ways to Deal With Bullying at School