How to teach kids about the Republic day 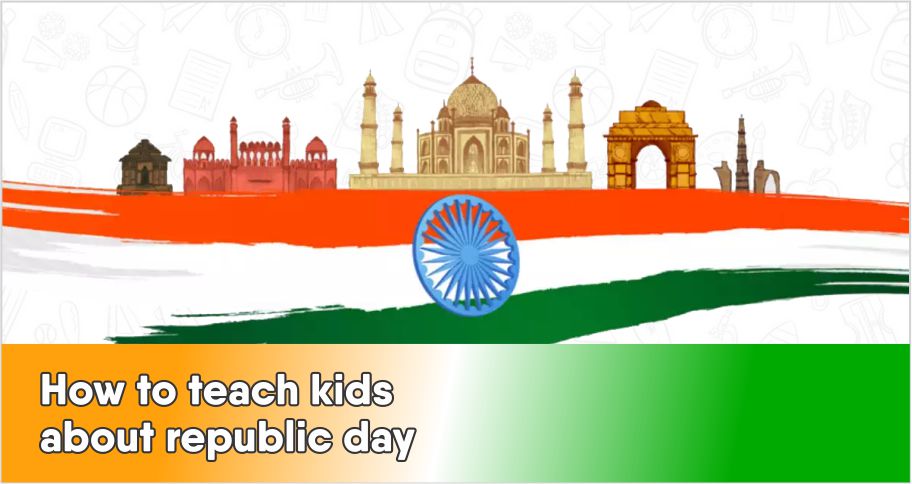 Patriotism gives us the feeling of purpose, let us care for our fellow people, and makes us more responsible. In most cases, patriotism leaves no ground in mind for selfishness to sprout. As soon as a person starts loving their country, their selfish needs begin to dwindle. When parents make it their goal to teach their children to be patriotic, their little ones forsake pursuing trivial pleasures of life and start to feel a higher calling. Due to this noble commitment and single-mindedness, the probability of them enjoying fulfilling lives immensely increases.

Instilling patriotism right from their young age will also help kids get a sense of belonging and greater purpose. Their volition of putting the country first, and by extension its people, develops, molding them into extraordinary citizens.

And what other day is more suitable for infusing patriotism in children than Republic Day? It is the optimal time to teach our kids the history of our country, the endurance and tenacity of our valiant freedom fighters, and about the resultant independence we all get to enjoy. So let’s get started.

The foremost thing you have to do is teach your children the difference between these two candy-ridden national holidays. Independence and republic are like apples and oranges. The former was when the British Raj ended in India, and we ousted them on August 15th, 1947. While the latter, celebrated on January 26th, 1950, marks the day when India became a republic by adopting its fresh constitution, which is the largest written constitution in the world, and Dr. Ambedkar is considered to be its head architect.

Countries are, by definition, a bordered landmasses composed of people of different shades and colors. And India is one of the most diverse countries in the world. You compare the South to Northeast or East to West, and it won’t surprise you that the cultures are completely different. So how is it justifiable to let a single person rule the entirety of a country that flaunts so much diversity? We have all witnessed the nefarious ways of monarchy or dictatorship; our ancestors even suffered one. When one person or one family rules the country, chances are, the citizens will not lead peaceful and happy lives. Its citizens should rule the country rather than just one family or a class of people.

Taking this into account, on 26th 1950, our forefathers announced that India is a republic; our motto is ‘Government of the people, for the people, by the people.’ Thanks to our collective decision to make India a republic, we have tools like elections and legislative assemblies. It is the observance of the day on which the country unified and agreed to elect its administrators and follow the framework laid down in the constitution. Democracy begins here.

How to teach kids about Republic day?

One republic day is not even close to enough to teach kids about our country’s colorful heritage or the dozens of leaders who struggled and sacrificed their lives to obtain the freedom we all enjoy today. But it is a start. The stories you teach your children during this day makes him/her more patriotic, differentiate right from wrong, and ultimately, he/she will want to imitate the freedom fighters and do their best to help their fellow humans. This doesn’t just give them incredible personality to tackle life, but also an opportunity to think about climbing the government hierarchy to go good for the people.

Educational activities for Kids on International Day of Education