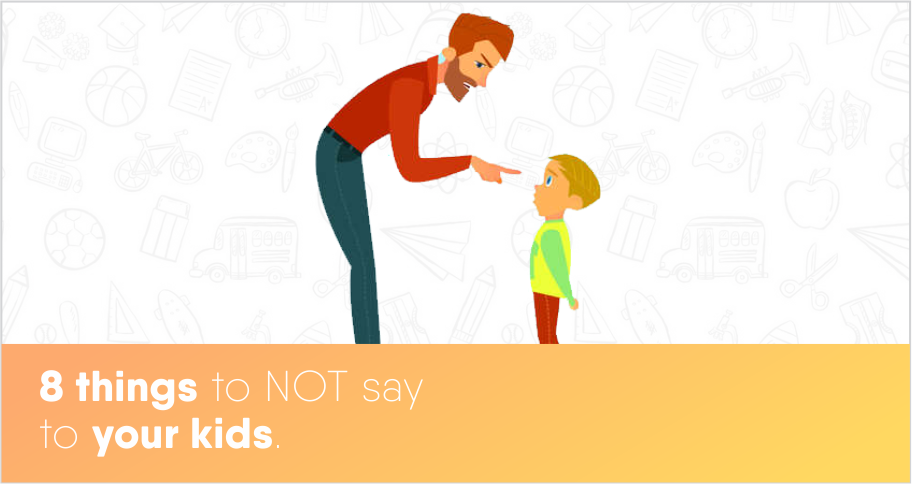 Parenting is not an easy job. You have to take care of yourself as well as others. Just like any other human, sometimes we may go overboard with scolding when we are tired or upset. These words, which may appear inconsequential for us, have the power to leave permanent damage to a child’s mind and self-esteem. A growing child’s mind is soft and pliant as a sapling, so it’s important for us parents to make sure our words aren’t too caustic and damaging. Your words can influence the kind of person your kid grows into. Although every parent tries their best to provide the best environment and support for their child, they might slip up once or twice. If you want to know how not to traumatize your child and want to know how to deal with it, you have come to the right place. Here are some phrases that you should stay away from when reprimanding your little one. Below are 8 things not to say kids.

Eight things not to say to your kids

Although healthy competition is important for the growth and development of any kid, it might harm their self-esteem in the long run. Be it physical education in schools or academics, comparing siblings can make them associate how much they are loved with their results/scores/behaviors. In case a kid does poorly compared to their sibling, this might even lead to feelings of anger and resentment. Thus, it’s important to include this in things to avoid telling kids.

Instead, encourage your child to compare his current results with his past one. This way, he can see how his own efforts affect his life.

Humans, in general, are always self-critical of their looks. This is especially true for children aged 5 to 16 who believe their parents’ opinion is the truth.  While it might be true that losing weight can be beneficial to your kid’s health, calling them fat to their face can damage their confidence and cause them stress and anxiety. Fat shaming is often the primary cause of eating disorders among kids and teenagers.

Instead, it would help if you put emphasis on the benefits of eating healthy and staying fit so they can enjoy life to the fullest. Don’t let it be about looks! Instead, join your kids on a morning walk and use that time to bond!

Similar to the above point, kids tend to absorb comments faster when parents say hurtful things. Thus, repeated comments on their intelligence can cause them to doubt their own skills seriously. Among the things to avoid telling kids insulting their idea is an important one. If you want your kids to develop and nurture their creative potential, it is vital not to call them or their idea stupid.

Instead, you can work them through the issues they are facing and come up with solutions and as for any mistakes, learning from them is the essential aspect of growing up.

Avoid using sentences that associate gender with any particular characteristic. In the case of other adults, gently ask them to refrain from saying similar stereotypical words.

Just like everyone else, we, parents also have times when we are upset and angry. But it’s important to remember that guilt-tripping a child is not going to solve anything; rather, it will only create future issues. Sometimes kids do things that waste our efforts, but blaming them for it is counterproductive. Parents shouldn’t make kids feel like they owe them anything for raising them.

Instead, sit down and have a proper discussion with your kid regarding the issue and explain to them how their behavior affects you.

Vague threats of violence and punishment might make your kid listen to you for the meantime, but it will soon wear off. Furthermore, threatening is not a good way to build up connection and trust with your kid!

Instead, take some time to explain to them the WHY behind your requests and the consequences of their actions. Not only will this make your child open up more, but it is also more likely that they will actually listen to your requests.

As parents, some events that might seem insignificant to us have much importance when it comes to our kids. Thus, it’s natural that their emotional response might be different from ours. Instead of dismissing it as not a big deal, parents should teach them how to deal with failure or disappointment.

Similarly, when I was your age falls flat on the ears for children since society as a whole has progressed a lot since that time. To make an experience relatable, parents can word the situation to fit similar events as their kids.

What is the most psychologically damaging thing you can say to a child? Among the things to avoid telling kids, perhaps the most hurtful one is telling them they are not wanted. It’s common for people to get angry and tell their kids that no one wants a child like you. But as parents, we have to understand that his outer world and associations influence a child’s behavior.

Thus, whenever your kid is misbehaving, try to look for the influences or reasons that might cause them to act that way.

As a child, the person we listen to most is our parents. Kids are taught to listen to their parents as they know what’s best for them. Other than the ones discussed above, some other things to avoid telling kids include marital troubles or discussions about their relatives that are not appropriate for their age. As parents, it’s our responsibility to create an environment that is nurturing for both their mind and soul. If you could go back in time, what would you ask your parents not to say to your younger self?