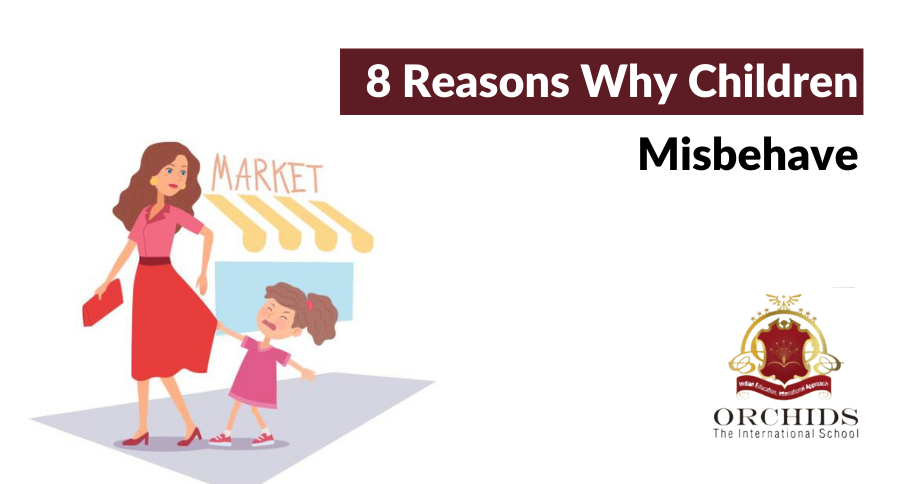 Misbehavior in children is a common trait for this generation. Parents often worry about how their kids will grow up to become good people if they are so easily annoyed and misbehave so bluntly. However, there are many reasons why kids misbehave and are irritated, and it is essential to know why to make a plan for how to deal with the behavior. For example, some children may be bored or frustrated because they cannot express themselves well, while others might need more attention from their parents.

The following blog post will explore the eight most common reasons why kids misbehave to help you figure out what you should do next time your child does something wrong.

Children sometimes misbehave because they want attention. They may be seeking someone in their family to react to or show them any concern. It can feel like no one is noticing, and children might do this when it feels that way. Children also have a tough time understanding why we get frustrated with certain behaviors—they know if it seems to get a reaction.

When children are trying to manipulate or when they feel bored, frustrated, and lonely, these behaviors can happen. They may also do this when their needs aren’t being met—for example, if the child is hungry or doesn’t have anything else going on in his day.

Kids often try to imitate how others behave. For example, if they see their teacher raising their voice in the classroom, then chances are that child will do so as well. They might be imitating someone they have seen on TV or in a movie.

Just as adults can mimic the behaviors of others, so too can children. For example, they might be trying to get attention by misbehaving, or modelling after people they see on television and in movies who always get what they want just because their parents enjoy spoiling them rotten.

Remember that children are not born with predetermined personalities. They learn how they will behave by interacting with the people around them and observing others’ behaviors. If you need your child to be obedient, they must see parents obeying authority figures such as their grandparents and every other elder.

They Want To Test Limits

If a child has been denied something for so long, the first thing they want to do is break that restriction, which you will count as misbehaving. After that, kids might be testing and seeing what mom and dad will tolerate. It’s important for parents not to react negatively.

They Show Their Independence

When they start learning something, children try to show it off in front of their friends and in front of their elders. As a result, there comes a feeling of superiority that “yeah, I can do it now.” And in doing so, they sometimes, or more often, go wrong and start misbehaving.

They Have Behavioural Issues

Children might be going through issues like ADHD, autism spectrum disorder, or anxiety. For example, children with ADHD (Attention Deficit Hyperactivity Disorder) or autism may exhibit destructive behaviour due to medical conditions or physical disabilities. These kids need more attention than the average child does, and when their needs go unnoticed for too long.

Also, they are overwhelmed and not able to follow directions. Classroom rules make no sense because they don’t understand why the teacher has certain expectations of those at home. School is too noisy, so it’s difficult for them to adjust to every other kid’s environment. A frustrated, anxious, and depressed child might lose interest in going to school.

They Have Learned Behaviour

Children initially start to misbehave when their demands are not met. And once they catch that everything is being fulfilled because they shout, yell, and misbehave in whatever manner they can, a problem arrives. And they make this behaviour a habit.

They Have Unmet Needs

Mostly, children are not good at communicating what they need. So when they need something, maybe food, or even a hug, they react by misbehaving.

Kids often have unmet needs, and when they need something, but can’t express it in words. Their brains might do this: “if you don’t give me what I want now, then you’re mean.” -. This is why children sometimes act out to control.

They Have Big Emotions

Kids are not good at handling their emotions. Be it any aggression, love, happiness, frustration, tiredness, hunger, or anything else, and kids can only tolerate it to some extent.

Kids may misbehave for several reasons, but the most common ones are listed here. What kind of behaviour do you see in your children? Do any of these eight factors apply to them? If so, it might be time to discuss how they could improve discipline and follow-through at school with their teachers. Remember that this isn’t an all-or-nothing issue – there are other ways to help our kids develop good behaviours besides just punishing bad ones!

If you feel that one of the reasons kids misbehave with you is lack of attention, try it out, plan a short trip together, take them to a picnic on the weekend, and be interested in what they say and what they like to do. Kids behave for so many reasons, but you can’t ignore the fact that you have to address this issue sooner or later. So take small steps towards building a bond with them, observe what you are doing wrong with them, for them and try to implement changes.

Nothing gets better than one on one communication; when people say communication is the key, they are telling you the golden rule of saving most of the bonds and relationships you have around you.

Most of the time, children misbehave because there is no one to talk to them and listen to what they want to share. Do not let this happen, and try being a good listener to your kids.

If you still feel that you can’t understand the reasons why kids misbehave around the house, do not hesitate to opt for child counselling sessions and getting advice and guidance from expert professionals to assess the way of thinking of your kids and put a stop to children misbehave and attitude issues.

Kids misbehave for so many reasons that it becomes tough for a parent to keep up all the time; when they want something, they want something else. But can sort all of these issues and child behavioural problems with effective communication, child counselling and many other measures.

So instead of asking reasons why kids misbehave, we should ask what we can do to prevent the issues of children misbehaving and behavioural changes. This way, we can prevent kids from developing a negative side and become good parents.

Do the first few years of child brain development have lifelong impact?