Storytelling is an important writing skill that students need to learn to tell a story. The English story telling method illustrates the manner of telling a story. The main points described on this page should be included.

How to Tell a Story?

Storytelling is an act of narrating a story with the help of words and actions. Usually, stories are told for entertainment purposes, but sometimes stories are narrated for informational or educational purposes as well. The storyteller narrates information in an interesting manner. You must have heard stories from your parents, grandparents, teachers or friends. They must have used story telling methods. Let us take a look at some ways of telling stories effectively.

A story should be structured in the correct way. It should always have a beginning, a middle, and an end.

Connecting with your audience will help you to keep them engaged for a long time. They will bring their entire attention to your story. If your audience is sitting in front of you while narrating the story, try to make some eye contact as well. 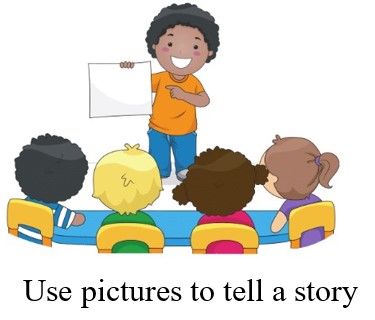 Sample English Story Telling: The Fox and the Grapes

Once upon a time, there was a Fox. He suddenly saw a big bunch of grapes that was hanging from a vine. The grapes were very juicy, and the Fox became greedy and wanted to have them all. The bunch of grapes was hanging from a branch, and the Fox wanted to have it. He jumped, but he missed the grapes. So, he walked off a short distance and took a leap at it, and fell down once again. He tried repeatedly but did not succeed. Now he became angry and sat down. He thought that he was a fool to run behind these grapes that were not very tasty. And he walked off.

Make use of these concepts to excel in English storytelling.

How to Use the Past Tense to Tell a Story?

A story belongs to the past. It should be ideally narrated in the past. This is because you must be saying something that has already happened. However, anything related to the story can be described in the present tense.

Once upon a time, there was a poor farmer.

How to Use Sequencing in Storytelling?

Sequencing helps in narrating the story in the correct sequence.

Introduction: Once upon a time, there was a Fox. He suddenly saw a big bunch of grapes that was hanging from a vine.

How to Use Pronouns to Tell a Story?

After using a name like 'the fox', the next sentences that you say can be followed by pronouns like she, he, they, him, her, I, we, my, mine, themselves, and ourselves are used depending on the story.

The bunch of grapes hung from a high branch, and the Fox had to jump high for it. The first time he jumped, he missed it.

Tell a story you recently read. Narrate it to your friends or family in your own words.