How to Write a Song in English?

Song writing in English can be an interesting way to write poetry. Students will learn how to choose song topics and how to a write song in English. Describing words are used to describe this topic extensively.

I. How to Start Writing a Song?

A song is a short piece of music consisting of rhyming words which is about the topic and it sounds melodious. Song writing is an art that is a combination of talent. Let us see below how you can learn to write a song.

First decide a specific topic on which you want to write. It could be on mornings or nights or a colour or animal or a climate.

Take a paper and write down the words related to the topic. It could be words or phrases. These should indicate the specific features of the topic you have chosen. 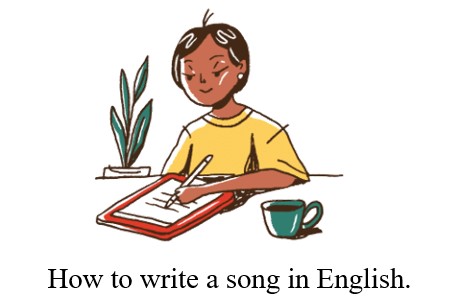 Choose the mood of the song. Will it convey feelings of loss, happiness, anger or sadness? The wordings of the song must be written according to the mood and emotion the song wants to express or convey.

Check the words you have written and start writing short lines or rhyming sentences with them. Think of how to start the song.

Decide on whether you want to repeat words as chorus and in which part of the song you want to include it.

Decide on whether you would like to rhyme the entire song or certain lines of the song. If you want the entire song to rhyme, then the words must rhyme at the end of each line.

1. First choose pairs of rhyming words These could be random words that rhyme with each other like air- bear, water- hotter, better-butter, etc.

2. Write these pairs of rhyming words one below the other while you leave some space before it.

3. Frame a sentence which ends with the rhyming word.

This is a story of a boy upstairs

5. Rearrange the pair of lines if needed for logical order. You can add lines in between the poem which do not rhyme if you need to add it in the

How to Use Rhyming Words to Write a Short Song?

Rhyming words are two or more words that have the same ending sound.

How to Use Verbs to Write a Short Song?

Verbs are the action words that describe what the subject is doing.

How to Use Describing Words to Write a Short Song?

For his baby sister
With eyes so bright
Little Johnny

Write a short song on any topic that you like.