How to Write Dialogue Writing?

Today, students will learn the interesting skill of writing dialogues to create their very own comic strips. This concept will help students to learn how to write dialogue writing in English.

I. How to Write a Comics Dialogue?


Writing dialogue for the comic is not easy. Giving characters their own unique voice is a great task. The dialogue must sound realistic and match the character you’re writing for.

Hence it is important to work on the character profile before you start writing the dialogue. This will help you to know how to write comic dialogue for the character.

Comics are always created in a layout that has various parts. Learn more about it below:

Panel: It is the image that is surrounded by a border. For instance, a square, a rectangle, a circle, etc.

Gutter: The empty space between the borders of the panels is called a gutter.

Speech bubble: The shape that circles around the dialogue the characters speak.

Caption: A box separate from the image, which usually gives context to what is happening in the story, is called a caption. 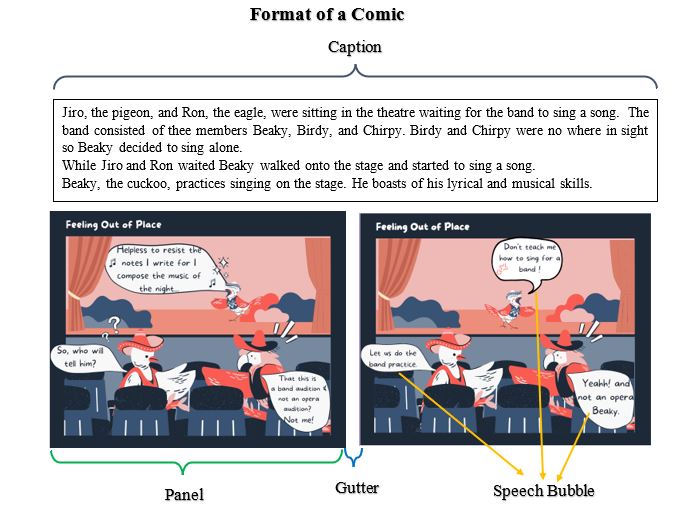 Comic writing is challenging at times since you will not know if your dialogues will fit until the pictures are created. Sometimes no matter how great a dialogue you have written, when placed in the comic panel, it seems too much. Hence, you might have to edit it a couple of times to make it fit. A solution to this is instead of writing many sentences in one speech bubble alone, and you can split the sentences into various panels.

Just keep in mind that you will have to tweak your dialogue when it goes on the panel (In the comic strip). You have to determine what has to stay and what can be done away with. Sometimes the dialogue can be to the next panel.

Remember that you are writing for a visual medium like a comic. You have to decide whether the dialogue moves the story forward or the visuals. You will have to make the picture come alive by using sound words like boom, tring- tring, woof, etc. This would make your characters come to life. These words are usually used in the speech bubble or the shapes shown below:

Too much text for comics is totally unnecessary no matter how good it is. Look at the comic and decide what must be said and what is unnecessary, even individual words in a sentence. If certain words don’t change the meaning of the overall comic, it has to go. Avoid giving internal monologues or long speeches. 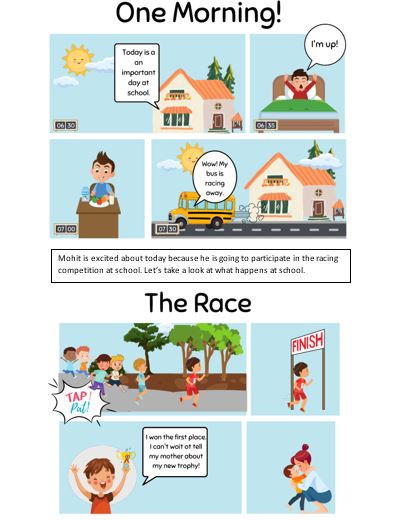 How to Write Dialogue in the Present Tense for Comics?

In general, dialogue writing in comics is always in the present tense.

How to Use Sound Words for Dialogue Writing in Comics?

If a character falls in a comic book, does it make a sound? Though Comics are a visual medium, sound is a major part of it. Sounds make it symbolic without writing much.

The louder the sound, the bigger the word. If the letters are repeated, it indicates the duration. The colour, weight and shape of the letters indicate characteristics of whatever is making the noise. A sound might suggest the severity or an impact. Sound effects are loaded with more information than mere dialogue. 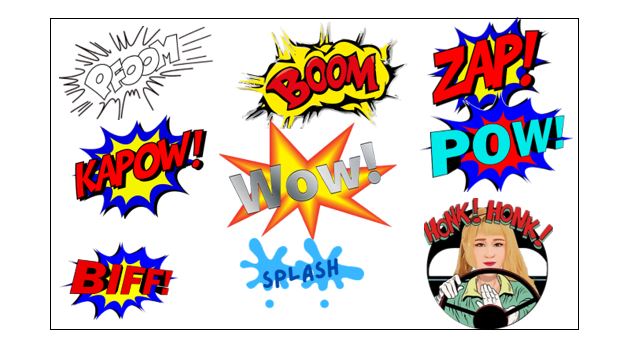 How to Use Punctuation for Dialogue Writing in Comics?

Use punctuations like an exclamation mark, question mark, full stops and capitalization as and when required.

That this is a band audition and not an opera audition? Not me!