Monsoons in India are different in type depending upon the location. The monsoon in the northeast is not the same as in the southwest. Students will learn about monsoon meaning, average rainfall, rainfall intensity, etc. That also connect students with the mathematics concepts of volume, circle graphs, bar graph, and numbers.

India is a vast country which experiences a different climate in different regions. There are four distinct seasons in India, namely:

The Monsoon in India starts in June and lasts till September. 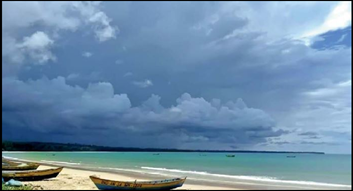 pattern. Therefore, it is also called Rainy Season or monsoon in India.

The difference between India's highest and lowest recorded monsoon rainfall is approximately 1178 cm.

The Volume of Rainfall Formula:

The amount of rainfall received is known as the volume of the rain.
The formula to calculate the importance of the rainfall collected is:

Rainfall Intensity is the ratio of the total amount of rainwater during the given period to the duration of time of that period.

Ritu Collected 105 cu. M of Rainwater in an Area of 50,000 sq. Cm Container. Calculate the Depth of the Rainfall.

The formula to calculate the volume of the rainwater is:
Volume = Area × Depth of the rainfall
From it follows that:

Depth of the rainfall =
Volume / Area

Substitute 105cu. m for volume and 5sq. m for Area in the formula and then divide to get the depth of the rainfall.

Suppose That in a Place, It Rains Every Day for a Week. The Amount of Rainfall for Each Day Is Shown in the Table Below. Calculate the Average Rainfall of the Week.

Also, Draw a Pie Chart to Represent the Given Data. 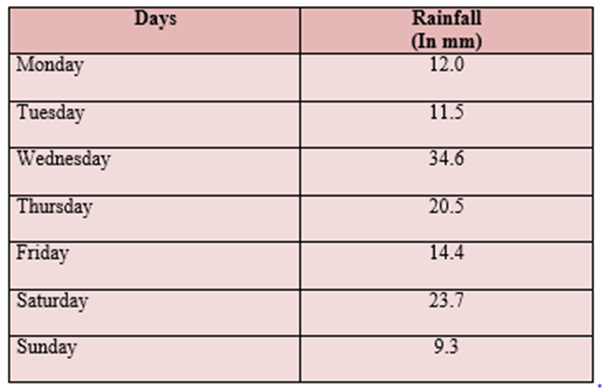 The pie chart of the given data is shown below: 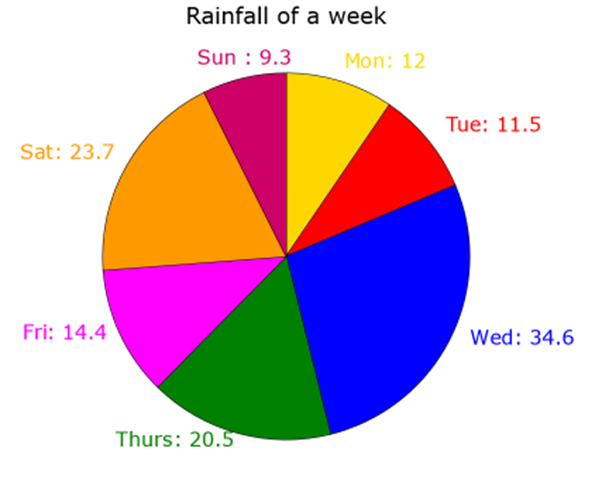 Rina Observed That in a Shower, 180 cm of Rain Falls in 15 Minutes. Calculate the Intensity of the Shower in mm per Second.

The formula to calculate the intensity of the water is:

Therefore, the intensity of the shower is 2 mm per second.

Suppose the Average Rainfall of Jalpaiguri Is 2674 mm. What Is the Total Rainfall (in M) Received in Jalpaiguri in a Year?

The formula to calculate the average rainfall is:

Below Is the Bar Graph That Represents the Data for the Rainfall of the First Five Months of a Place. 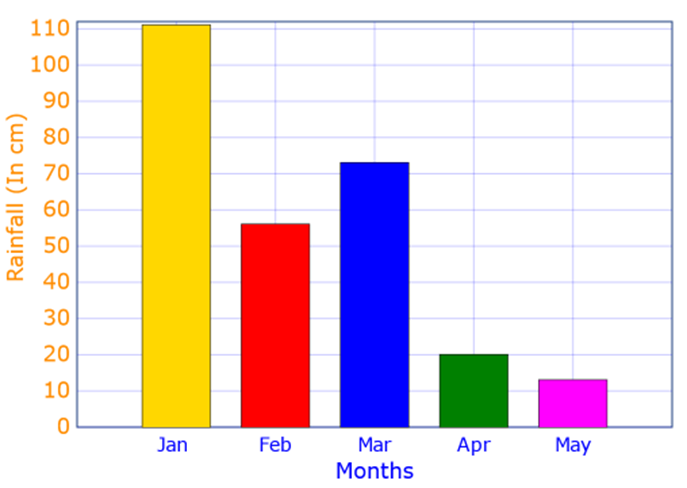 Observe the Graph Properly and Answer the Following Question:

a) In Which Month Was the Highest Rainfall Recorded?

b) What Is the Average Rainfall for the First Five Months?

c) If the Total Rainfall Falls on the Area of 16 Square Cm, Then Calculate the Volume of the Rain.