My Visit to the Aquarium Summary

Students of class 4 will know to write ‘My Visit to the Aquarium Summary’ by using the given points to write about their visit.

I. How to Write About a Visit to an Aquarium?

An aquarium is a transparent tank of water in which fish and other marine creatures, and plants are kept. An aquarium gives an experience to visitors with life forms of the marine world. Let us know the points to consider while describing your visit to an aquarium. 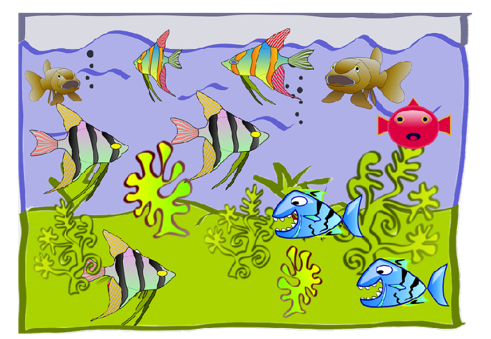 Write about the plan to visit an aquarium, whether a school trip or a family outing.

Write about the new things you learned. Write about how you all returned home and what you learned after your visit to the aquarium.

Sample: My Visit to the Aquarium Summary

On a Thursday afternoon in October, our class teacher announced that the school would take us to the Government Aquarium Bangalore tomorrow. I had been to the zoo with my family, but I had never been to an aquarium museum. Marine animals have always fascinated me.

The next day, in the first half, the two sections of Class IV, A and B assembled at the school gate with our respective class teachers. We boarded the school bus and, within a short time, reached the destination. The Government Aquarium Bangalore is located on M.G. Road in the heart of the city. It is the second-largest aquarium in India. One can see it at the entrance of the famous Cubbon Park.

There were a few instructions mentioned on a board outside the Aquarium, like the days it was open, timings, and entry fees. For school children, the ticket rate is Rs.5.00 per head. It is free of charge for children under five years of age.

It is maintained by the Karnataka Fisheries Department. It is an octagonal-shaped three-storeyed building. Visitors are not allowed on the ground floor. Visitors are allowed to see the first and second floors of the building, which display a range of aquatic flora and fauna. We stood in a line. Then we entered. On the first floor, I saw huge tanks with various kinds of big fish. The second floor had small and medium-sized tanks with ornamental fish varieties. I saw a range of original and exotic freshwater fish species.

There were fish of all different colours, sizes, and shapes. Some were bright in colour, and some were dark in colour. Most of them swam around on their own but schools of little fish swam together. The names of various fish were written below the tanks. I just remember a couple of fish names.

How to Use Proper Nouns to Describe a Visit to an Aquarium?

A proper noun is a noun that names a particular place, person, or thing. You can use proper nouns to specify the name of the aquarium, its location, and the kinds of fish or other underwater species you saw there.

On a Thursday afternoon in October, our class teacher announced that the school would take us to the Government Aquarium, Bengaluru tomorrow.

The Government Aquarium in Bengaluru is located on M.G. Road in the heart of the city. It is the second-largest aquarium in India. One can see it at the entrance of the famous Cubbon Park.

How to Use the Past Tense to Describe a Visit to an Aquarium?

On a Thursday afternoon in the month of October, our class teacher came and announced that the school would take us to the Government Aquarium, Bengaluru, tomorrow in the first half.

Write an essay on your visit to an Aquarium.