The pyramid of Giza is famous for being the largest pyramid structure. Students will learn about pyramids, the great pyramid of Giza, pyramid 3d shapes, pyramid shape examples, tombs etc. That also connects students with the mathematical concept of 3d shapes in maths.

Pyramids and tombs are made in ancient times for the dead people. Pharaohs of Egypt are expected to be a god in the afterlife. They used to build massive pyramid graves for the next world and the gods. These pyramids were filled with everything each ruler would need to sustain themselves in the next world. Pharaoh Khufu is the first one to build the first pyramid of Giza for himself.

Pharaoh Khufu’s great pyramid is the largest in Giza and is 147 meters above the plateau. Each gigantic pyramid includes temples, a palace, solar boat pits, and other structures. Egyptian pyramids are one of the seven wonders of the world. 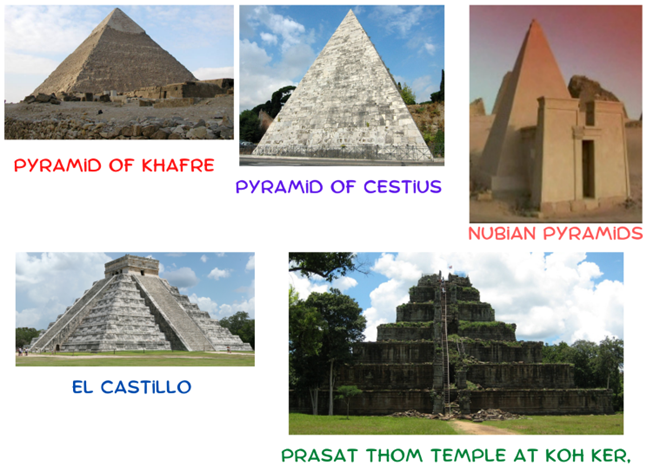 A pyramid is a construction with triangular outer surfaces that meet with a single step at the top, making the figure roughly a pyramid in the geometric sense. A pyramid may have a base as triangular, quadrilateral or polygonal. As such, it has at least three exterior triangular surfaces. The square pyramid has a square base and four triangular exterior surfaces.

What Is a Tomb?

Traditionally, tombs are made to contain the remains of dead people. The tomb has always been considered the home of the dead people, and these are constructed as the final resting place of the soul of the dead people. During the Mughal empire, India was introduced to the building of a tomb for the ones who passed away. Their magnificent tombs are made to show honour to the deceased. The famous tombs made for the dead are Bibi ka Maqbara, Taj mahal, Hazira Maqbara, Tomb of Akbar the great, Gumbaz at Seringapatam, and Sheikh Chilli’s Tomb. The Taj Mahal is one of the seven wonders of the world. Türbe of Damad Ali-Pasha is an ottoman mausoleum erected which is also a tomb. The tower of the tomb is conical. The martyrdom of Husseyn ibn Ali is also a tomb that is Muslims’ pilgrimage. 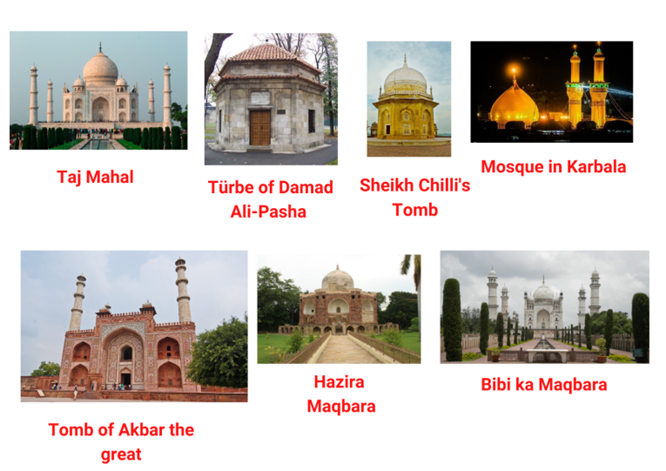 The tower form of the tomb may have been based on the
cylindrical and conical shape. Traditionally the burial was made on
a circular ground plan. But square, rectangular and polygonal
configurations were introduced in the 12 century.

The School Has Arranged a Trip to Agra for the Grade 3 Students. Students Visited the Taj Mahal. The teacher asked students to Identify the 3-D shapes that resemble the Taj Mahal's parts. What Will Be Their Answers? Mark in the Picture. 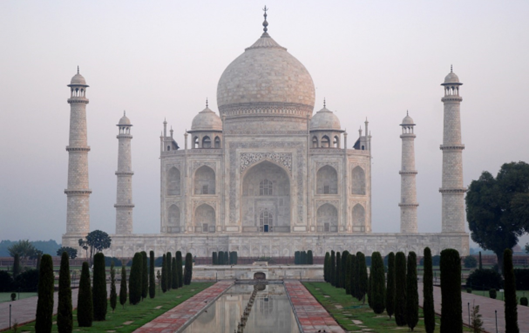 The answer of the students will be 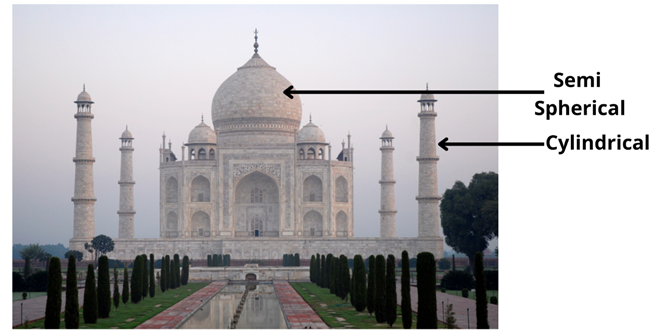 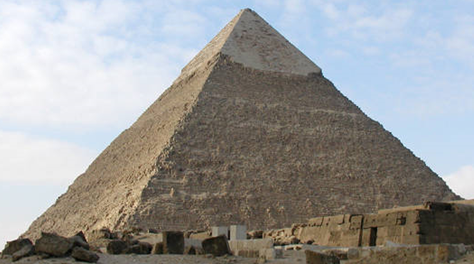 In the below picture, the corners, edges and faces are marked in the pyramid of Pharaoh Khafre.

Hence the number of corners, edges and faces of the pyramid of Pharaoh Khafre is 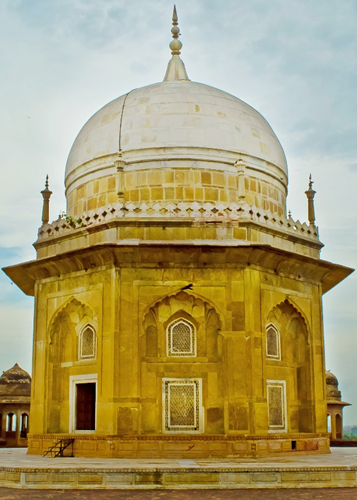 Here is the picture where she marked the faces of Sheikh Chilli ka tomb. 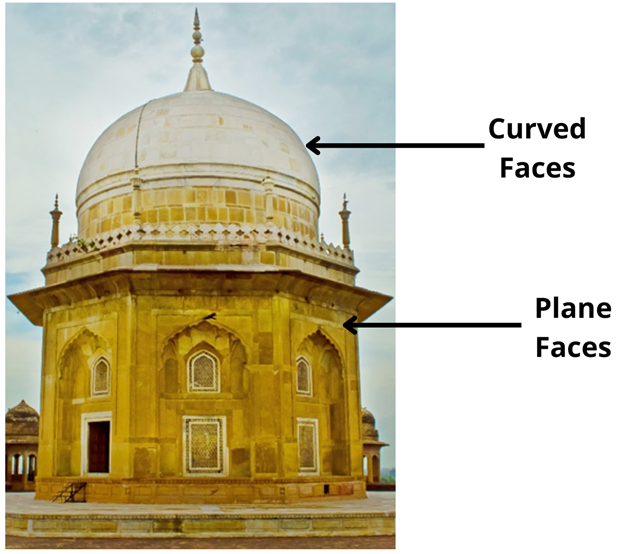 In the below list, the number of faces of Sheikh Chilli ka tomb is given explicitly.

Ramu Was Given the Below Picture, and the Teacher Asked Him to Mark and Counted the Number of Edges and Corners. 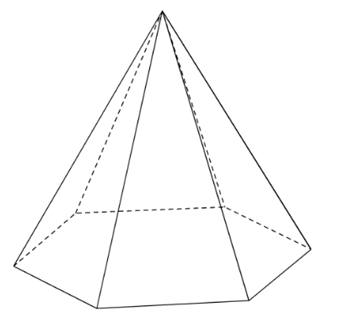 Help Ramu to Solve the Question.

In the picture below, Ramu has marked the hexagonal pyramid's edges, faces and corners. 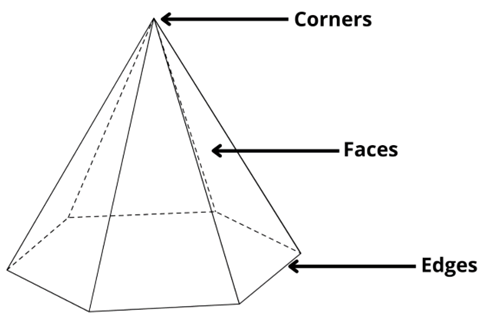 In the below lists, a hexagonal pyramid's number of corners, edges and faces is given explicitly. 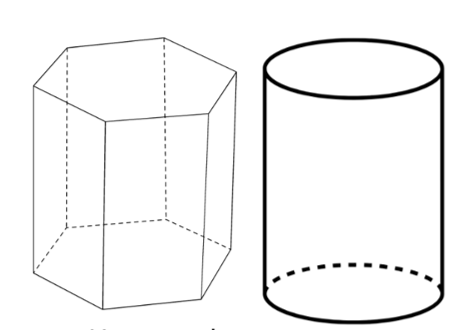 Marry’s response will be following 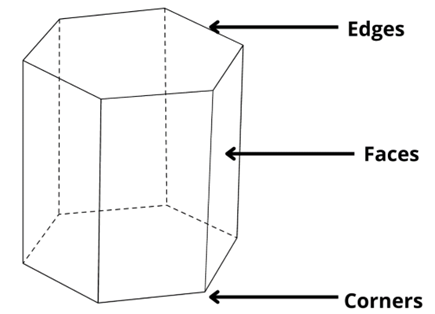 The below chart the number of edges, faces and corners of the hexagonal prism.

Rani’s answer will be the following. 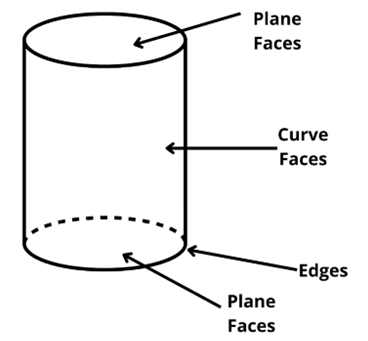 The below chart the number of edges, faces and corners of the Cylinder.

Here are the difference and similarities between the figures shown in the table.