A proper understanding of vowels plays a very important role in kids’ learning. In this learning concept, students will get to learn vowel phonic sounds for long and short vowels that will help to improve their pronunciation.

Each concept is elaborated to class 1 English students using definitions, examples, illustrations, common mistakes, and concept maps. Once you go through the concept, check your learning by solving the two printable worksheets given at the end of the page.
Download the long and short vowel worksheets and check your answers with the worksheet solutions provided in PDF format.

What are the Vowels in English?

A vowel has more than one sound. Vowels can be divided into two parts based on their sounds – a) Long vowel sound and b) Short vowel sound.

a)What is a Long Vowel Sound?

When a vowel is said, sometimes the sound it makes is that of a long vowel sound.

There are two ways when long vowel sounds are used.

i. A long vowel sound is made when two vowels sit next to each other in a word.

What is a Short Vowel Sound?

Some vowels make a short sound as these sounds are not stretched.

The short vowels always come at the beginning or middle of the word. It never is at the end of a word.

Look at the long and short vowel sounds list to have better understanding: 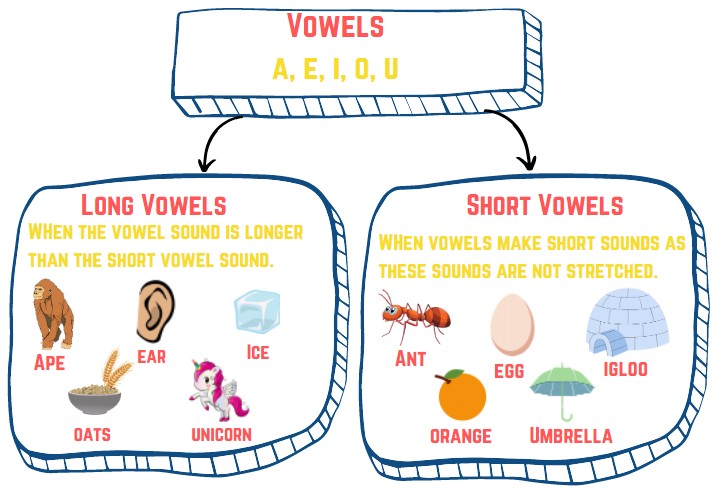