A story is a simple narrative which includes either real or imaginary characters.

The given story of ‘The Lion and the Mouse’ is completed by using the words from the hint box given below: 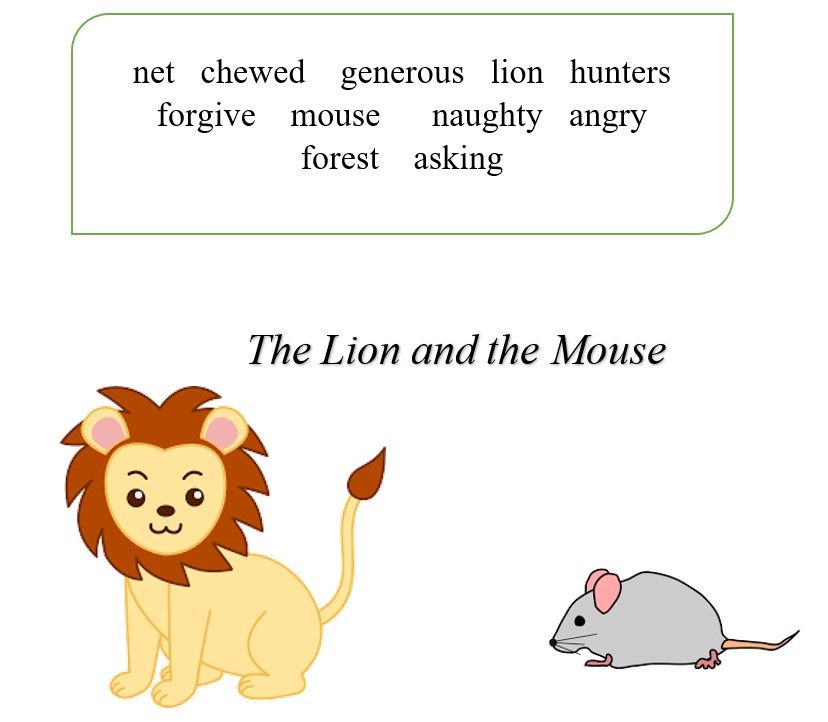 Once upon a time, there was lion and a mouse living in the forest. One day, the lion was sleeping in his den when the little mouse came near him. The mouse was very naughty. He climbed to the head of the lion and started disturbing him. The lion woke up and found the mouse on him. He was very angry and wanted to eat the mouse to teach the mouse a lesson. The little mouse was frightened and started asking for forgiveness. He said to the lion “Please forgive me. I will surely help you one day”. On hearing the mouse, the lion's anger disappeared. The lion was generous enough and allowed the mouse to go.

After a few days, the lion was moving around in the forest and suddenly a huge net fell on him. The lion got caught in the net and very soon he would be caught by the hunters. He was frightened and cried out for help. No one came to help the lion. Then, the mouse came to help him. The mouse chewed the net and set the lion free. In this way, the mouse became friends with the lion.

How to Complete the Story?

When you write a story, mention the following in the given order:

Write a story about a day you spent at the beach.

The Sunday at the Beach

There was a boy named Ravi who lived in the Calicut district of Odisha. Ravi lived with his parents and his younger sister. One day, the whole family decided to go to the beach to spend the entire Sunday. They drove the car to the location. His mother carried some food and juices to the beach. The children took their bat and ball to play on the beach. Both of the children took out their bat and started to play. The mother and the father placed the mat on the sand and sat on the it. The weather was very pleasant and the cool breeze blowing. Ravi and his sister played throw ball with their ball for a while. At noon, the whole family had their lunch. Ravi’s father had prepared dessert for all of them, which the family enjoyed heartily. After a while, Ravi and his family made sand castles.

In the evening, they went home. They were happy about the day they spent at the beach. 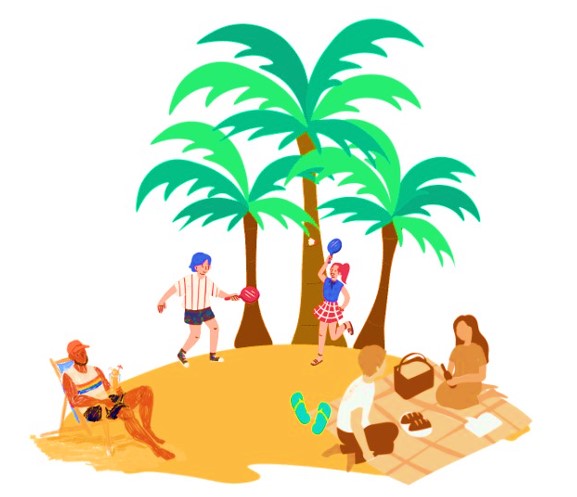 1. Look at the characters mentioned in the story.

Ravi lived with his parents and his younger sister.

2. Try to understand the actions in the story.

In the above story, the entire family decides to go to the beach. They drove the car, ate food, and played some games. This part is explained with the help of action words. Action words talk about the actions performed by the characters.

The mother and the father sat on the mat.

3. See for other details in the story.

Look for additional information that might be related to the story. Such details are added to the story using describing words, position words etc.

Parts of a Story

A story is made up of different elements. There are five main elements in story writing. They include characters, setting, plot, conflict, and resolution.

Make sure to go through the clues carefully. Don’t miss any of them. Missing any of the clues would create errors in the story. 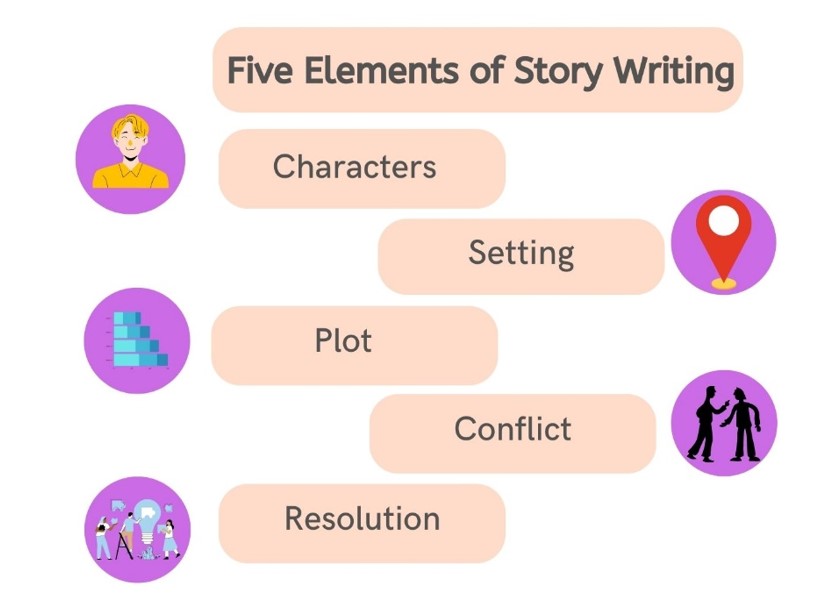