In the first sentence above, “yellow” is the describing word and “driving” is the doing word.

In the second sentence, “pink” is the describing word and “dances” is the doing word.

How to Make a Sentence Using Describing and Doing Words?

Ravi is wearing a black shirt and riding a red bike.

Here, the describing words ‘black’ and ‘red’ are talking about the noun’s ‘shirt’ and ‘bike’, respectively.

Now, a doing word talks about the action performed by the doer of the action. In the sentence given, there are two doing words that takes place at the same time.

Ravi is wearing a black shirt and riding a red bike.

In some sentences, there is just one doing word that explains the actions done in the sentence.

Most of the time, describing words are placed after the word it modifies, but if the verbs such as ‘be’, ‘seem’, ‘get’, ‘become’ or ‘appear’ are used in the sentence, then the adjective is used after those verbs.

You seem to be tired.

Here ‘tired’ is the adjective used after ‘be’. 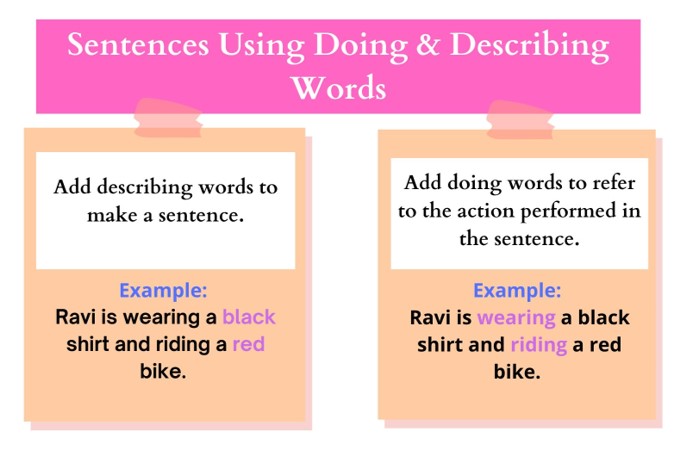