Gender of nouns in English grammar is a concept that indicates the biological identity of any living creature or any non-living identity. It is important to know gender to classify nouns. This concept explains the gender of noun definition, types, and their usage in sentences. The relevant common mistakes and exceptions have also been clearly described with examples.

The students will learn the following from the concept:

Illustrations, clear examples and mind maps have been used to make the students of Class 3 understand the concept thoroughly. They can evaluate their understanding by answering the two free printable gender worksheet for class 3 provided on the page. The solutions to these gender of nouns worksheets have also been provided and can be downloaded in PDF format.

Nouns like a person or thing or animal can be classified into gender.

For a better understanding of gender nouns, it is better to study the types. 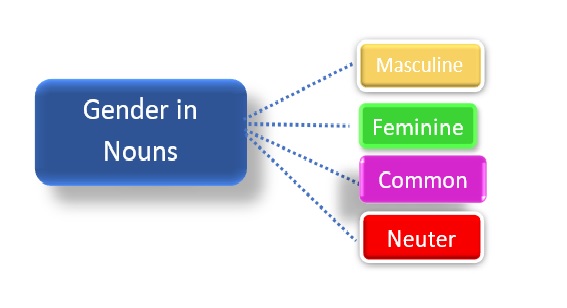 The names that are given to men and boys are classified as masculine gender.

Name given to women, female animals, and girls are classified as feminine gender.

A noun given to either a female or a male, which is commonly used for both feminine and masculine gender, is called a common noun. Words like a parent, friend, child, servant, enemy, thief, cousin, baby, student, writer, teacher, etc.

A noun that refers to a lifeless thing that cannot be classified as feminine or masculine gender.

Difference Between Masculine and Feminine Nouns

When writing about unknown gender using the third person pronoun, avoid using he/she, his/her. Instead, use ‘their’ or ‘they’ as the preferred pronoun.

Each person must analyse his/her contribution to the team.

Each person must analyse their contribution to the team.

Anybody who claims he/she is medically fit for undergoing this adventure must get a fitness certificate from his/her doctor.

Anybody who claims they are medically fit to undergo this adventure must get a fitness certificate from their doctor.

When names of countries are used as a geographical unit, it is considered the neuter gender.

However, when it is used as personified objects or economic units, they are sometimes considered as feminine gender based on the context they are used in; hence feminine pronouns are used with them.

India is proud of her cultural heritage. 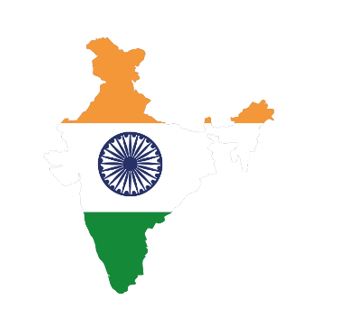 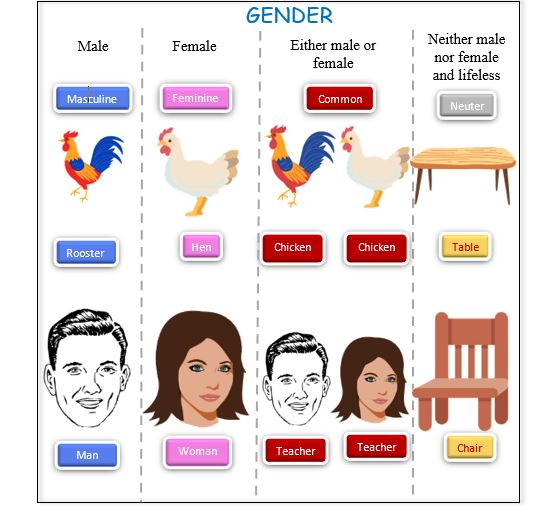