Nouns are one of the major concepts of English Grammar for students. It is introduced with its classification, definition, and examples. Students will also come across the common mistakes made while using common and proper nouns. They will also be acquainted with the exceptions to the rules of usage for these nouns.

This concept will assist the students to identify:

The concept is explained using apt illustrations, daily-life examples, and mind maps to help them understand it systematically. They can assess their understanding of the particular grammar concept by attempting to answer the dual common noun and proper noun worksheet for class 3 provided at the page end. The solutions for each of these worksheets have also been provided in an easy-to-download PDF format.

A Noun is the name of a person, place, animal, thing, or idea.

A common noun is a general name for a place, person or thing in a group. Unlike proper nouns, it is not capitalized. Some examples of common nouns are cat, boy, country, mother, table, etc.

Proper nouns indicate a name for specific things, people, places. Proper nouns are capitalized depending on how it is used in a sentence.

Examples to Show the Difference between Common Noun and Proper Noun:

Let’s take a look at how each name, place, animal or thing can have a common noun and a proper noun.

A girl is smart and intelligent.

Rekha is smart and intelligent.

There are a few exceptions which are listed below:

Cities are more polluted compared to the villages.

‘Umbrella’ is a common noun. However, in an essay titled ‘My Umbrella’, it is written in capitals. 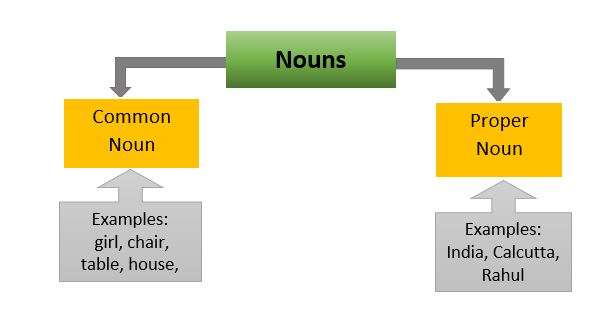