Types of Vehicles for Class 4 EVS

Different types of vehicles help us to facilitate varieties of daily tasks. To carry heavy goods from one place to another place we use four to six wheelers. For water communication, we use boats and vessels. During a medical emergency, we use ambulances to carry patients to the hospitals.This concept is about the types of vehicles we use everyday.

After going through the concept, the learners will be able to:

Download the worksheets and check your answers with the worksheet solutions for the concept Types of Vehicles in PDF format.

1. According to the number of wheels, vehicles can be of the following types—

2. According to the usage of energy sources, vehicles can be of two types—

Other types of vehicles:

A tractor is a farm vehicle used in agriculture. It is used to loosen and prepare the soil before sowing seeds. It is also used to uproot weeds and provide irrigation. Tractors are operated by farmers.

An ambulance is a vehicle used to transport sick or injured people to the hospital. An ambulance is always equipped with a first aid kit and essential medicines. Usually, a driver and a nurse stay with the patient in the ambulance for initial health support. An ambulance has a siren that alerts people of its presence.

Fire engines appear like trucks, and carry firefighters to the site where a fire has broken out. They are fitted with sirens and have all the required equipment to extinguish the fire.

Police cars are special vehicles used by police for patrolling and chasing criminals. They are fitted with sirens and emergency vehicle lighting.

Racers use racing cars to participate in car races. These are high-speed cars.

Goods trains are used to transport goods from one place to another place like coal, grains, fuel, etc. A goods train may have twenty-eight to thirty wagons.

Battle tanks are fighting vehicles that are used in wars to throw explosives.

Combustion: The process of burning. In this case, it indicates the burning of fuels.

Fuel: Something which is burned to generate heat or power.

Yacht: A large and expensive boat used for racing or recreational purpose.

Irrigation: The supply of water to farmlands for better crop production by various means is called irrigation. 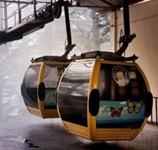 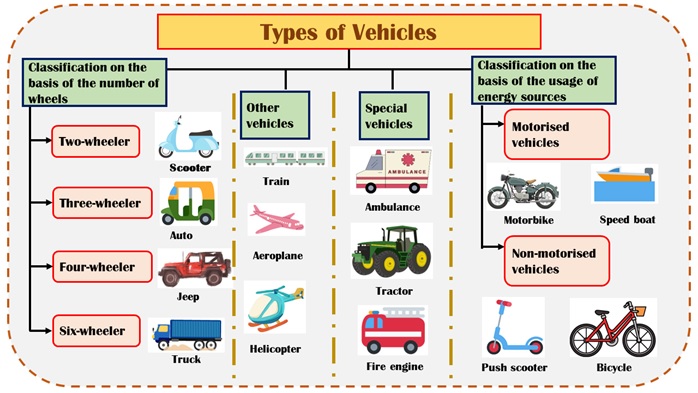