Download the worksheets and check your answers with the worksheet solutions for the concept Air Pollution provided in PDF format.

Pollution is when harmful substances like gases, smoke and chemicals are introduced into the environment that contaminates it and causes damage to the living organisms.

The three main types of pollution are— 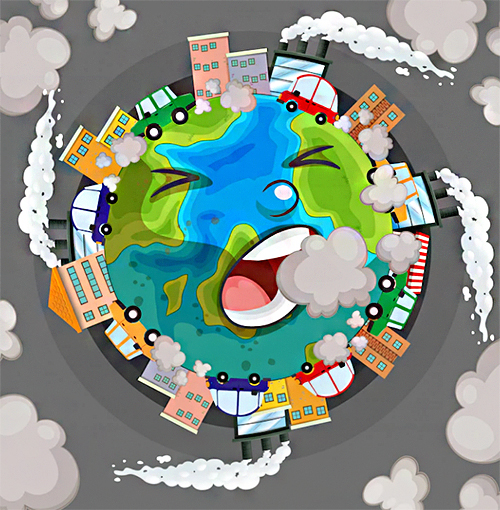 Pollutants can change the quality of environmental components like air and water physically, chemically and biologically.

Air pollution happens when the air gets contaminated due to harmful air pollutants like smoke, toxic gases, dust, etc., and this results in the degradation of air quality and causes serious health problems.

Motor vehicles like cars, buses, trucks emit harmful gases. The principal gas emitted by motor vehicles is carbon dioxide and some nitrous oxide. These gases cause the surrounding air to get polluted and contribute to climate change and global warming. 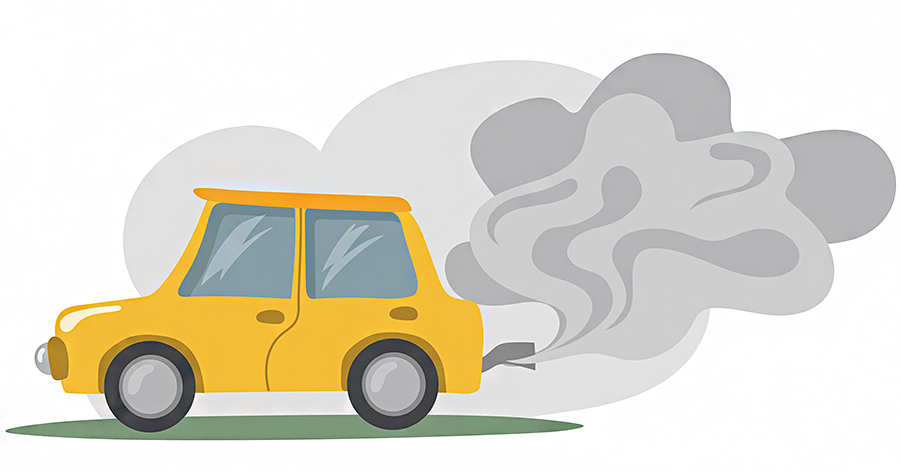 Chemical fertilisers give off ammonia, a very harmful gas that causes air pollution. 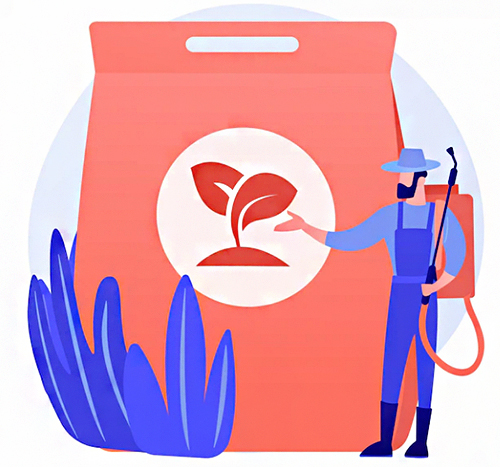 Factories emit several gaseous pollutants like sulphur dioxide, carbon monoxide and other hydrocarbons that mix with the air causing degradation of the air quality. 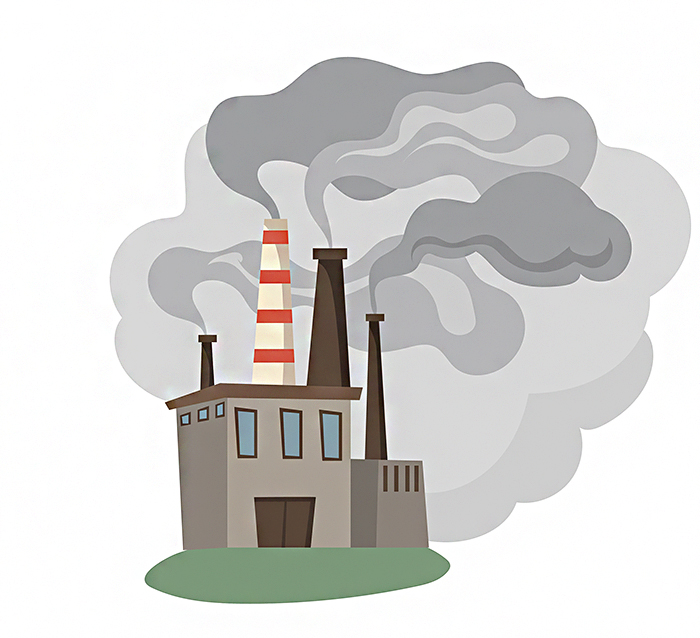 We are not protected from air pollution even in our homes due to indoor air pollutants like excess moisture, volatile organic compounds, carbon monoxide, and radon. 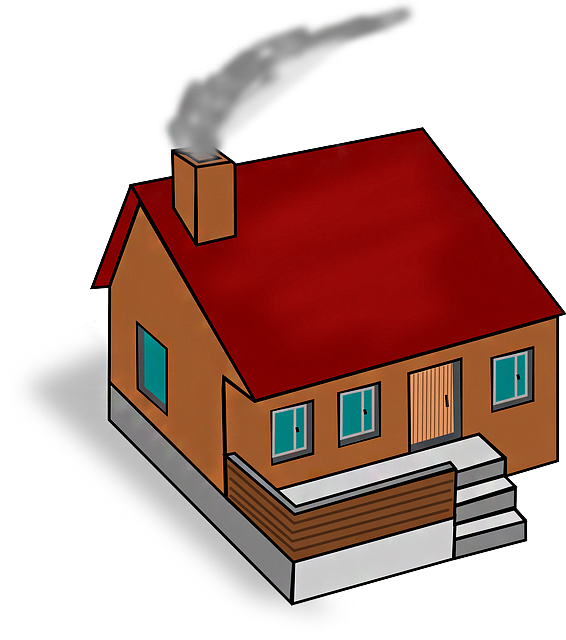 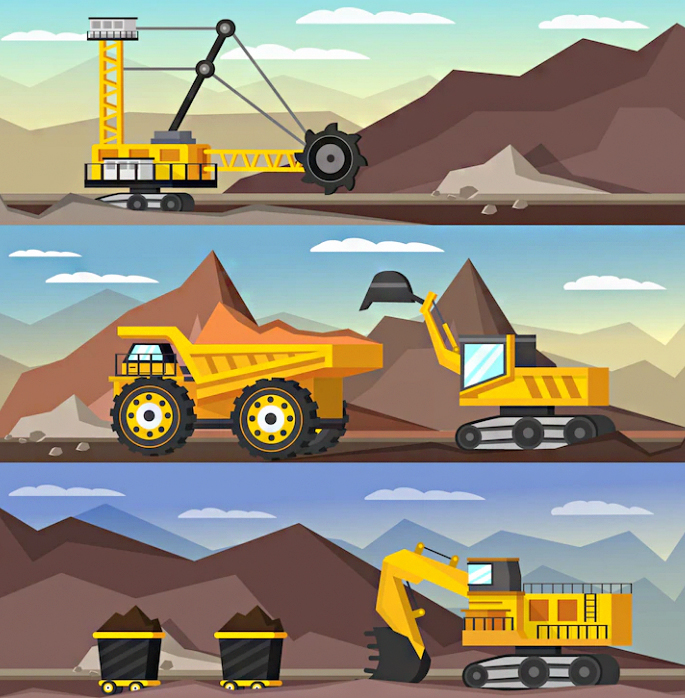 The burning of fossil fuels emits a large amount of carbon monoxide and sulphur dioxide, both responsible for air pollution. 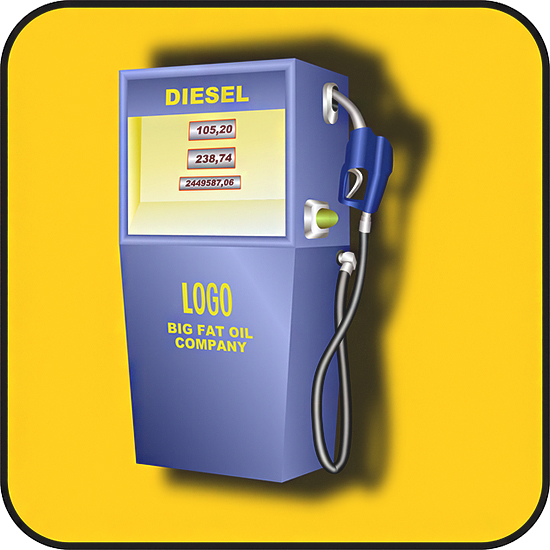 Deforestation is one of the primary causes of air pollution because fewer plants and trees mean less absorption of carbon dioxide. We know that increase in the amount of carbon dioxide is not suitable for our environment.

Our atmosphere is divided into many layers, among which there is an ozone layer that protects the earth from the harmful radiation of the sun. However, air pollutants like chlorofluorocarbons and halons emitted by refrigerants, solvents and propellants cause the depletion of the ozone layer. As a result, the sun's harmful radiations can reach the earth’s surface. 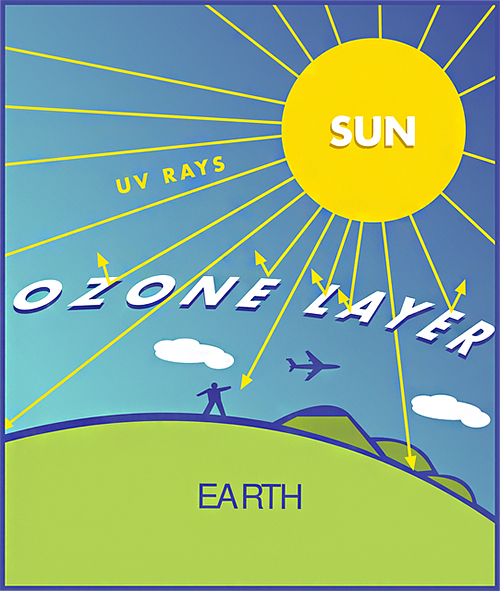 Due to excessive emission of greenhouse gases like carbon dioxide, methane, nitrous oxide etc., the earth is becoming hotter every year. This phenomenon is known as global warming. Due to global warming, the polar glaciers are melting, and the sea level is rising, and regions close to the sea are getting submerged. 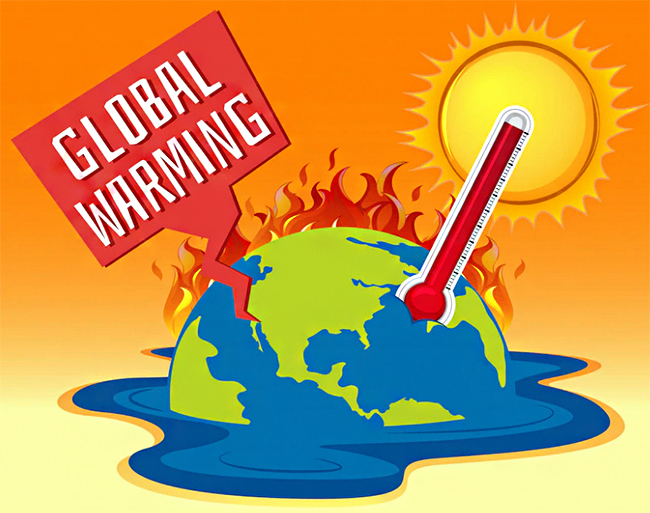 Harmful air pollutants like nitrogen oxides, sulphur oxides, etc., combine with the oxygen and water in the air to form acids like nitric acid and sulphuric acid. These acids mix with rainwater and come down on the earth’s surface in the form of acid rain. Acid rain causes extensive damage to plants, animals, and human beings and wears away buildings and monuments. 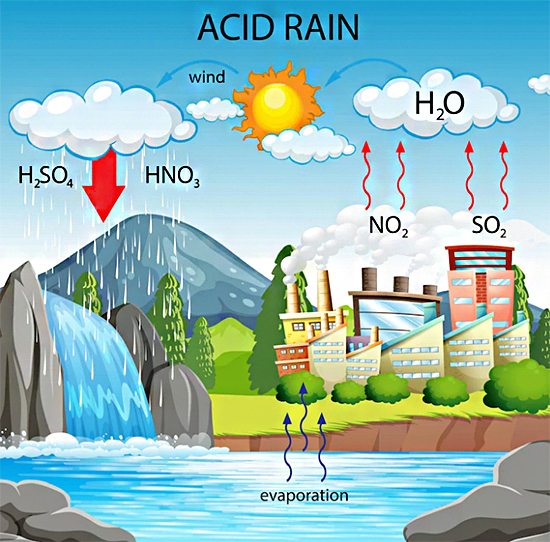 Air pollution causes many respiratory diseases like asthma, pneumonia and even lung cancer. 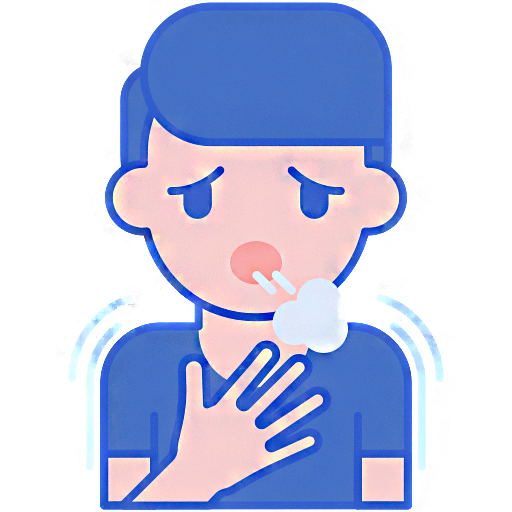 If we want to reduce air pollution, we should use renewable sources of energy like solar energy, geothermal energy and wind energy as these emit no toxic gases. 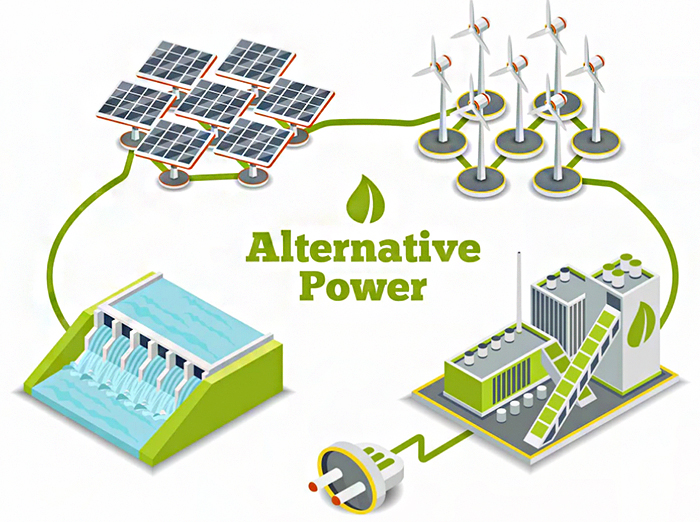 2. Minimizing the Use of Vehicles That Cause Pollution:

Vehicles that emit toxic gases should be avoided. Instead, the use of non-polluting vehicles like trams, electric cars etc., should be encouraged. We should also try carpooling and not use personal vehicles to travel short distances.

We should turn off our car engines when waiting at traffic signals and switch off the electric appliances when they are not being used to reduce the usage of fossil fuels because we know that the burning of fossil fuels leads to air pollution.

Afforestation or planting more trees can help improve the air quality as trees can absorb the toxic gases present in the air and reduce greenhouse gases. 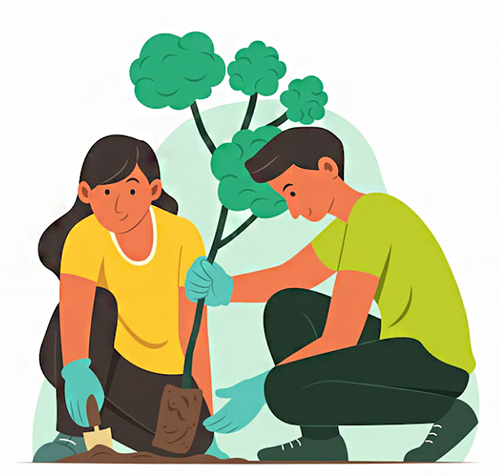 Climate hange: It refers to the change in the weather of a region over a long period mainly caused by global warming.

Renewable Energy Sources: These are energy sources that can be easily replenished unlike non-renewable ones which take millions of years to form and can eventually run out. Renewable sources of energy do not cause any pollution. 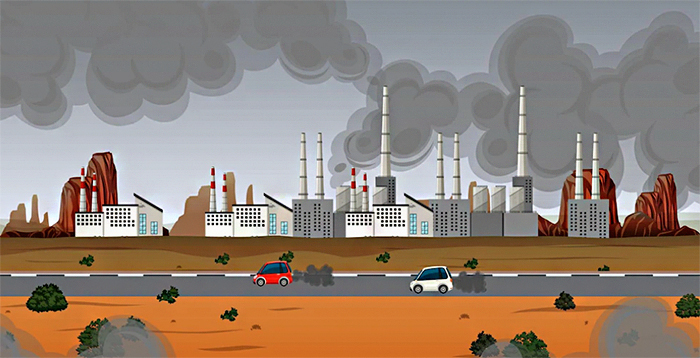 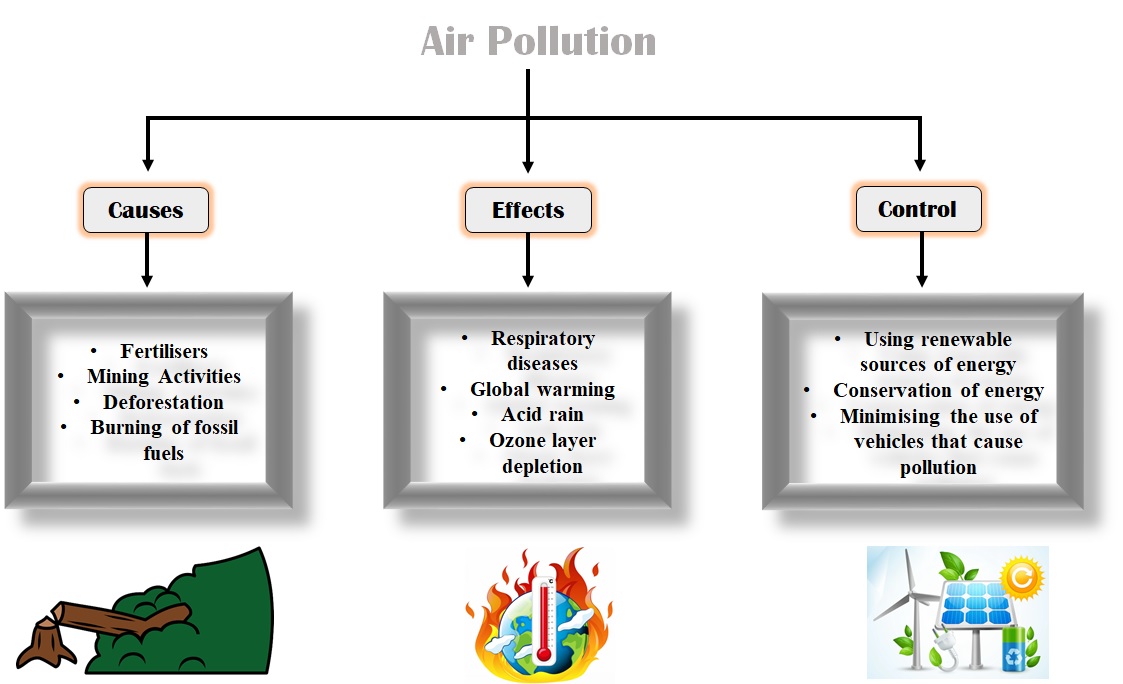