Units and Measurements for Class 4 Science

Download the worksheets and check your answers with the worksheet solutions for the concept Units and Measurements provided in PDF format.

A physical quantity is the property of an object that can be measured with a measuring instrument.

1. Fundamental Quantities: These quantities do not depend on other types of physical quantities.

Units and Measurements of Physical Quantities:

Examples: The length of a stick is 6 centimetres. Here, length is a physical quantity, and centimetre is its unit. 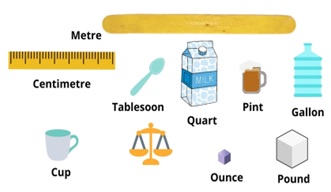 Requirements of the Standard Unit:

A set of fundamental and derived units is called a system of units. Following are some examples of the system of units based on the units of length, mass and time.

In this system, centimetre, gram, and second are the units of length, mass, and time, respectively.

In this system metre, kilogram, and second are the units of length, mass, and time, respectively.

In this system, foot, pound, and second are the units of length, mass, and time, respectively.

Scientists worldwide have accepted a set of standard units for measurements. This system of units is called the International System of Units (SI units). In 1790, the French created a standard unit of measurement called the metric system, which is followed by the SI units.

Types of Errors in Measurement:

1. Instrumental Errors: These errors occur due to the use of faulty instruments.

Examples: If the metre scale is not calibrated correctly, each measured value gives the same error.

2. Systemic Error: These errors occur due to the defective setting in the measuring instruments. Such errors can be minimised by detecting their causes.

Examples: If the pointer of the ammeter is not pivoted precisely at the zero of the scale, it will not point to zero when no current is passing through it.

3. Random Errors/Accidental Errors: These errors occur due to sudden changes in the experimental conditions. These are uncontrolled errors. These errors cannot be eliminated but can be minimised.

Examples: Change in temperature or pressure, change in humidity, fluctuation in voltage, etc.

Luminous Intensity: It is the quantity of visible light that is emitted in unit time per unit solid angle.

Dimension of a Physical Quantity: It is the number of times the fundamental units of mass, length, and time appear in the physical quantity.

Calibration: It is the process of checking and correcting the way how a measuring instrument works. 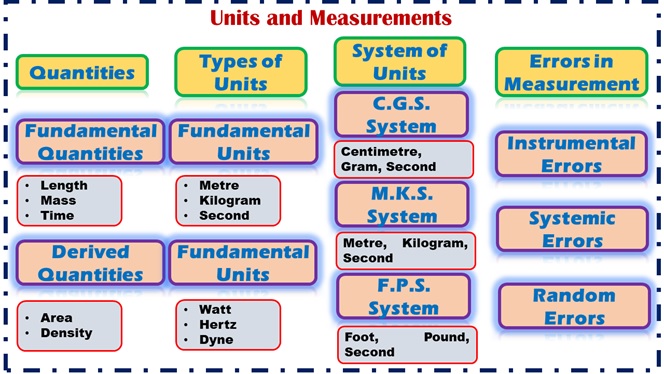