Concept: Making Sense of it

Characteristics of the Senses Poem:

How to Use the Five Senses in Your Writing? 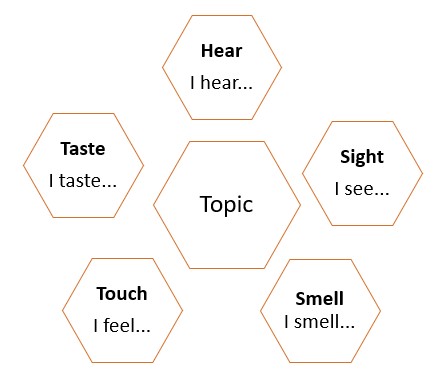 How to Write a Five Senses Poem?

Now that you've done some brainstorming, you can write a poem by adding the descriptions you felt using your five senses.
As has been discussed before, a five-sense poem is comprised of six lines. Out of the six lines, each line goes like this discussed below.

Hawaii
by Miss Larson
Hawaii is blue,
It tastes like shaved ice,
It sounds like waves crashing on the beach,
It smells like plumeria flowers,
It looks like my dream home,
It makes me feel happy.

So having studied so far, let us once have a look at the chief features of the ‘senses poem’.It consists of six lines.
A lot of similes are used for comparison. For instance, “ tastes like shaved ice”, “smells like plumeria flowers” etc.
There is no need for rhyme to write a five senses poem.
The first line compares the subject with emotion, color, or mood.
The next five lines compare the traits of the subject with different senses.
The topic is usually a one-word topic and an animal name is not chosen in this regard.

Sometimes the opening line is dropped and it directly starts with the senses. Then the poem becomes a five-line ‘senses poem’ instead of a six-line one.
We don’t have to use all five senses to write a poem. We only apply those that best convey the message. 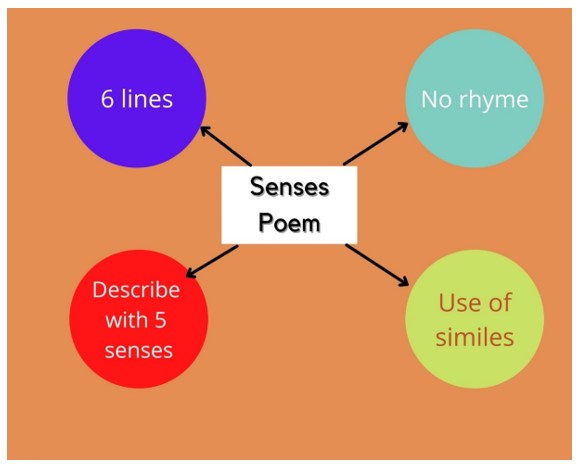