Past Continuous Tense in English for Class 5

Every learning concept for class 5 English students consists of examples, illustrations, and mind maps. They can assess their understanding of the concept by solving the two printable PDF past continuous tense worksheets given at the end of the page. Thereafter check your answers with the solutions provided in PDF format. 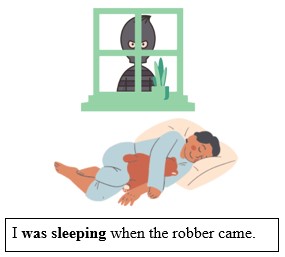 What is the action done by the speaker in the given an example?

In the above sentence, the speaker was doing an action (sleeping) that was taking place when the robber came (This takes place in the past). Therefore, this is an example of past continuous tense.

How to Form the Past Continuous Tense?

2. If the subject is a singular noun or singular pronoun (he, she, it) or the personal pronoun (I), the past auxiliary ‘be’ verb form used will be ‘was’.

3. If the subject is a plural noun or plural pronoun (we, you, they), the past auxiliary ‘be’ verb form used will be ‘were’.

4. To make the past continuous tense negative, we need to put the word ‘not’ after the auxiliaries ‘was’ or ‘were’.

When do We Use the Past Continuous Tense?

1. We use past continuous tense to describe an action that was happening before another action started. 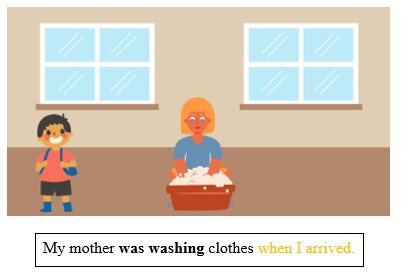 The mother was washing the clothes before her son arrived. The action (washing) was continuously taking place when another action (arrived) happened.

2. It can be used to talk about an action that had already started and was still happening at a particular time. In these sentences the exact time is mentioned. 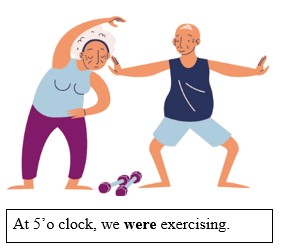 These people started exercising at 4’o clock and finished at 6’o clock. So, the action ‘exercise’ was happening at a particular time in the past.

3. It is also used to show two actions that were happening simultaneously in the past.

Both the actions ‘studying’ and ‘playing’ were already in progress at the same time in the past.

Past continuous tense should not be used to show habits in the past, instead in such cases the simple past tense should be used.

I was cooking on my own during those days.

I cooked on my own during those days. 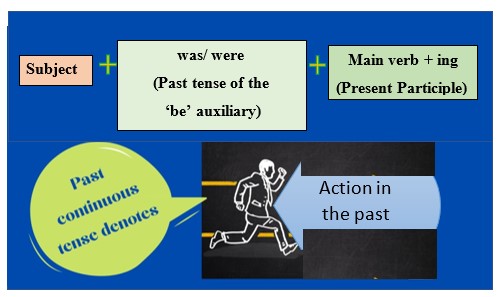