In this concept, students will learn:

Every concept is taught to class 5 English students with the help of examples, illustrations, and concept maps. Once you go through a concept, assess your learning by solving the two printable pronoun-verb contraction worksheets at the end of the page.

Download the worksheets and check your answers with the worksheet solutions for the concept contractions provided in PDF format.

The words ‘I’ and ‘am’ are made into a contraction by omitting the letter ‘a’ and replacing it with an apostrophe (’). “ I’m” has become a contraction.

What is a Pronoun-Verb Contraction?

A contraction can combine a pronoun and a verb together. It is called a pronoun-verb contraction.

Let’s look at a few sentences where we will use pronoun-verb contractions.

We combined the pronoun ‘she’ and the verb ‘is’ to form the contraction, “she’s”. We omit the letter ‘i’ and add an apostrophe (’) in its place.

The word ‘they’ is a pronoun, and ‘have’ is a verb. We have shortened the words ‘they have’ by dropping two letters ‘h’ and ‘a’ and added an apostrophe (’) to show the letters removed from the word.

When to Use Contraction?

1. Your handwriting is beautiful.

2. Your mother is cooking for us today. 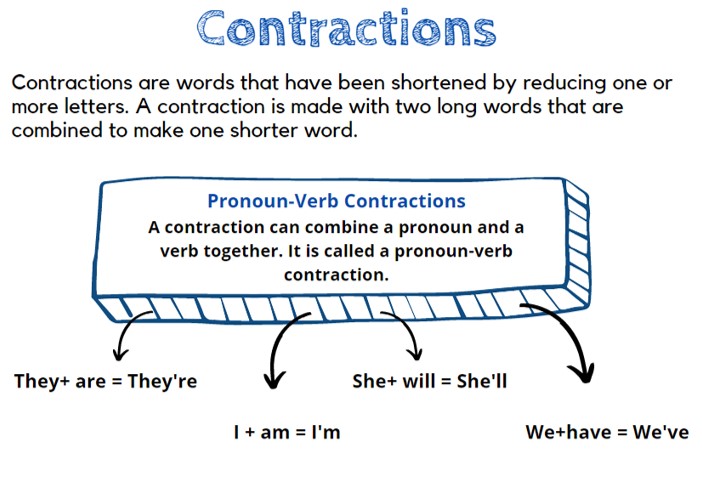