A decimal number contains two parts one is a whole number part, and the other is a fractional part. Here students learn about comparing decimals and how to compare decimals.

How to Compare Decimals?

Step 2: If the whole number part is the same then compare the digits in the tenth place. The decimal with the greater tenth digit is bigger.

Step 4: If the digits are the same then keep moving to the digits on the right and compare them until you get a greater digit.

Step 2: On moving to the right of the decimals it is observed that the unequal digits are in the hundredth place.

Step 1: Put the digits in the place value chart.

Step 2: Fill the empty squares in the place value chart with 0.

Step 3: Start comparing the digits in the place value chart from the left-hand side.

Step 4: If the digits are similar then compare the next digits until you get the different digits.

Step 5: The decimal with the greater digits is bigger.

Step 1: Put each digit in the decimals place value chart.

Step 3: Compare the digits starting from the extreme left side.

The digits in the hundredth place are unequal and also 8 > 4.

Ascending Order in Decimals: means to arrange the given decimals from smaller to bigger.

Descending Order in Decimals: means to arrange the given numbers from bigger to smaller.

Arrange the given decimals in ascending order.

The whole number part of all the decimals is the same. Therefore, compare the digits in the tenths, hundredths, and thousandths place. Arrange them from smaller to bigger.

Arrange the given decimals in descending order.

Place each digit in the decimal place value chart, put 0 in the empty square and then start comparing the digits from the extreme left.

Representation of Decimals on the Number Line:

Let us understand how to mark the decimals on the number line.

Step 2: Divide the line segment 2 and 3 into ten equal parts.

The students generally make mistakes in comparing by counting the total number of digits. 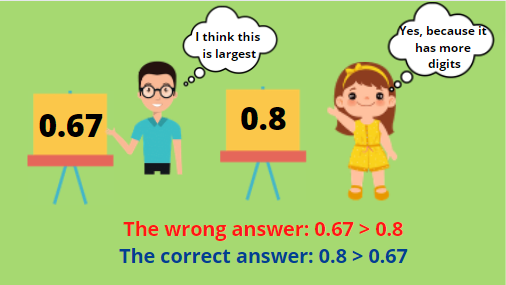