Rocks and Minerals for Class 5 Science

This concept mainly deals with the rocks and minerals and ores and their types.

Download the worksheets and check your answers with the worksheet solutions for the concept of Rocks and Minerals provided in PDF format.

Minerals are inorganic substances formed naturally in the earth and constitute earth’s rocks, sand and soil.

The metallic minerals that we use in our day-to-day lives do not exist in free forms in nature; rather, they remain in combined forms. Ores are those rocks from which metallic minerals can be mined for economic purposes. In other words, ores are mineral-rich rocks.

Example: Bauxite is an ore of the metal aluminium.

Some Important Metallic Minerals and Their Ores:

What Is a Rock?

A rock is a naturally occurring solid mass comprising one or more minerals.

Rocks are classified based on the quality, quantity and arrangement of the minerals.

Inorganic substances: Substances that do not originate from plants and animals.

Lustre: The way how light reflects on the surface of a mineral. It is an important property of minerals.

Fossils: Remains of prehistoric plants and animals that remain embedded in rocks and preserved over millions of years.

Temperature: The degreen of hotness or coldness of a body. 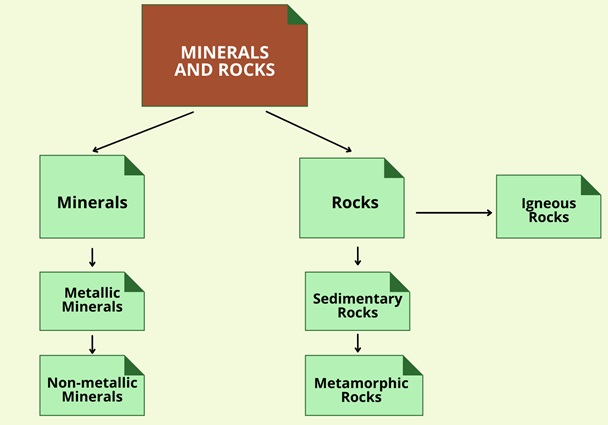