Top 7 Boundaries You Need to Set for Children Using Technology 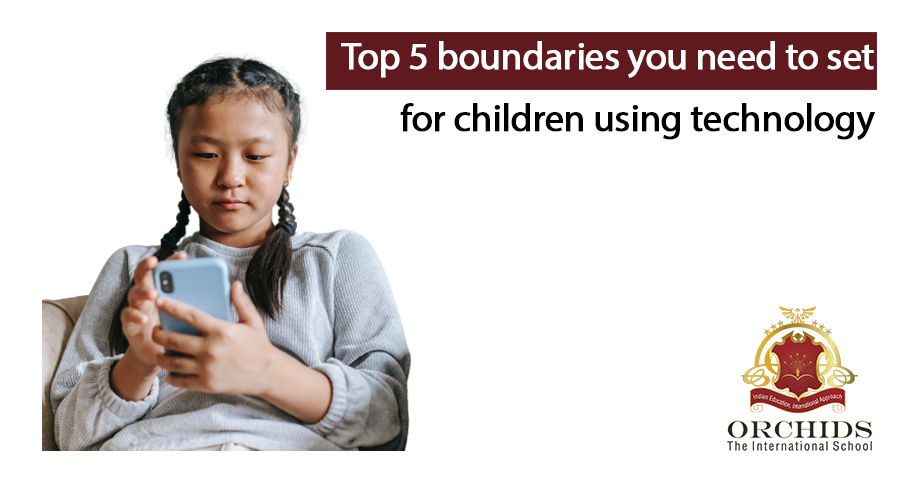 to look into kids affect due to children using technology, you need to look at the image down below. Do you find anything unusual?

In today’s blog, let’s look at the dependence of children using technology. In the modern digital era, most teenagers would like to spend their time behind a screen, whether using smartphones or watching videos on their laptops. It’s not uncommon to find children and teens stuck to their phones both in and out of the house. How many times has your kid not paid attention to you in favor of playing that smartphone game? Their usage of electronic gadgets is entirely out of control. Not only are they constantly in the virtual world, but they are also growing apart from human touch and interactions.

As the world becomes a more digital place, we cannot forget about the human connection – Adam Neumann.

This excessive usage of technology can significantly impact their health, both physically and mentally. It can also affect the rest of the family as well. Thus, there is an immediate need to teach the children using technology how to do it in a healthy way.

The Pitfalls of Children Using Technology

Several research has predicted that the overuse of digital media is creating many problems among children. These issues range from damage to health and body, mental stress, and social wellbeing. Below are some of the most common physiological and psychological effect children using technology without any restrictions:

Children using technology like to spend most of their time on social media. Not even bedtime is enough to deter them from scrolling through the apps. The light from the phone changes the body clock resulting in sleep irregularities. Your child might end up tired, nauseous, unmotivated, or aggressive if they miss out on essential sleep time. It’s been noted that those children who use their phones in bed have higher chances of getting sleep disorders.

Significant impact on their school performance due to Children Using Technology

Addiction to technology causes a visible effect on a child’s academic performance. It is given that the more a child is stuck to their phone, the less inclined and attentive they are to their homework. Infact, addiction to technology even prompts some children to carry their phones in their school bags to interact with their friends and play games while attending their class. They lack behind other students in terms of their performance. Thus, the frequent usage of smart devices plays a vital role in impacting your child’s performance in school.

High risk of obesity due to Children Using Technology

Teens using digital media excessively have higher chances of becoming obese. Teens who use smart devices for more than 5 hours are more likely to be overweight than teens who use them for 0 to 2 hours. This happens due to the sedentary nature of using any digital device. Without strict regulations on children using technology, they are more likely to play games online than play them outside.

Addiction to the internet

Yes, internet addiction is a real issue. The frequent use of the internet among children in the last decade has resulted in what psychiatrists call Internet addiction. The symptoms include inability to stay away from devices, general irritability, low self-esteem, poor sleeping quality, mood swings. Its overuse impacts not only their health but also their performance mentally and socially.

Change in behaviors due to Children Using Technology

It has been noticed that kids with excessive use of technology have a drastic change in their behavior. They began to emulate people they see online and can become habituated to lousy eating habits, bad manners, dangerous hobbies, and much more.

How to Set Boundaries for Children Using Technology

Although it has some serious disadvantages, using technology as a whole isn’t bad. It helps children become global citizens by connecting them with the rest of the world. With the rapid evolution and permeation of technology and the internet in our daily lives, kids need to learn how to navigate it responsibly. As a parent, instead of straight-up stopping them from using the internet, the ideal solution is to have some boundaries. Few rules you can set up regarding children using technology are:

Everything in life, including the usage of technology, needs a healthy balance with other activities. You can dedicate a particular time of the day where kids can freely use smartphones or watch a show on tv. The benefit of limiting screen timing will appear in the form of kids suddenly spending more time with the family.

No devices in the bedroom

As doctors suggest adamantly, no phones in bed. During the sleeping hours, ask your child to keep all the electronic gadgets outside the room. Make it a rule that no one can compromise with.

Kids tend to copy what parents do. Thus, you can guide your children in having a healthy way of replenishing their energy levels. The inability to manage stress results in high chances of children becoming addicted to technology.

Another way is to convert the digital company of virtual friends into the company of family members. Whether you like to play board games or plan to go for a family trek, make a regular schedule to have quality time with them. Don’t forget to ban the usage of electronic gadgets during this time!

Technology and Children work hand-in-hand, therefore make your child understand various aspects of using online media excessively. Explaining the cons of using media beyond their limit will make them aware of the dangers. Creating awareness is one of the best methods of setting boundaries when it comes to children using technologies.

To make your child come back to the real world, encourage them to do some physical exercise. Ask them to go for a walk, play a game, an activity that can improve their physical and mental health. You can also include activities that you can enjoy together as a family.

Set a specific limit for using electronic devices. Smartphones and other digital devices have inbuilt settings to monitor the use of certain apps. Encourage creativity among them so that they can divert their mind in doing some real-time activity.

Setting strict boundaries is not limited to just the rules above. Every child is different, and thus, while some need harsh rules, others might benefit from lenient ones. But the end goal is the same. To teach kids how to use technology in a healthy way and grow up in a balanced environment.

Parenting in the Age of Digital Technology

8 Unique Benefits of Understanding your Teen’s Personality, Take a Look!