Home » Blog » Child Learning » Why students should be allowed to read comics?

Why students should be allowed to read comics? 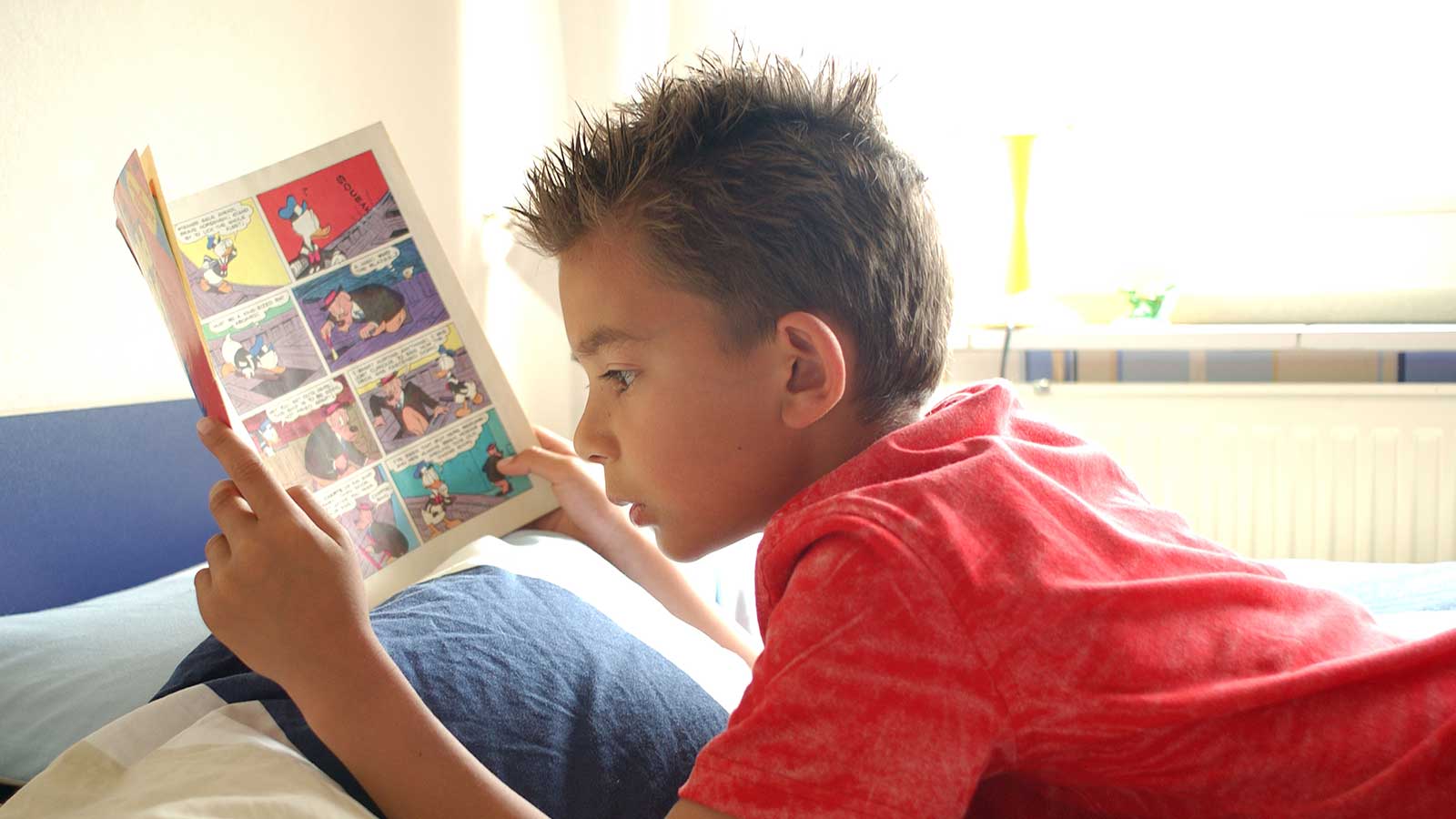 Comic books and graphic novels have increased in popularity among children of all ages in the last few years.

Many young readers, when confronted with solid pages of text, become intimidated and overwhelmed and just give up. Give the same reluctant reader a thick, juicy graphic novel like Jeff Smith’s Bone or Raina Telgemeier’s Smile and they dive in eagerly, devouring every page. With many struggling readers motivation is the key, and comics are motivating.

Here are 10 reasons why students should be allowed to read comics:

1. Their Lexicon of Complex Words is Higher than Most Publications

In a personal and published study of over 1,000 comics and their inclusion of higher-order words, most comic books and graphic novels featured an astonishing 36% – 76% of their text as representative of language found in senior secondary school and college/university placement tests. Most other periodicals and newspapers only garnered 14% of these higher lexicon words.

The world has become very media/visually literate. Someone who is learning English or a reluctant reader/writer could use the comic book. This can be as a means of engaging a sense of prediction and revision at the same time by following sequential design, yet being able to visually flip back and restore the immediate visual hit again and again. This informed memory access (I.M.A.) and renewal are central to learning English in its colloquial and contextual elements.

Many comic book writers tend to construct story arcs, over long periods of time. This requires readers to serialize their approach and wait a few weeks for the next installment. Charles Dickens did the same with his work. This affords the reader some time to contemplate the story. Even though the text might be presented in a chronological and sequential text-to-image presentation, the story arc can jump from past to present, and to the future, all in the same narrative.

Comic books serve reluctant readers best as an initial gateway to reading. “They are the gateway to books, the ability to bequeath the gift of wanting to read and continuing to do so is a tremendous present; comics are just as good as any novel.” Comic books provide further gateways up the literacy continuum with graphic novels like Kill Shakespeare that introduce more complex competencies like character amalgamation, prediction, and analysis.

Attempt the following experiment with any elementary or middle school student: have the student produce a character sketch. Most students will actually produce a drawing. Comic books provide multiple examples of how characters are structured, based on a back story, motivations, reaction to setting and place, and movement through plots as minor and major characters, and the introduction of what it means to be an antagonist and protagonist, and why this has developed. They offer a blueprint for the identification and replication of advanced writing techniques.

If a reluctant reader cannot picture specific plot points they will most likely become lost and set the book down. The ability to follow and then comment upon the plot is central to the development of childhood literacy. Children who are struggling with reading can easily discover the world behind the book, as their more proficient peers do, but can do so with the assistance of a comic book or graphic novel. Shakespeare is the quintessential example.

7. Rekindle the Imagination and a Desire to Write

George Bernard Shaw once said, “Imitation is not just the sincerest form of flattery – it’s the sincerest form of learning.” The sheer exposure to the imagination of the comic book writers and artists is a virtual guarantee that some of what children have read will adhere to them. One of the most significant connections a student can make is a text-to-self construction. Even if imitative, this is the spark that will fuel a love of reading and writing.

8. Allows the Framing of New Literary Worlds by Readers

Using the canon of the comic book story, students can explore the world and nature of the characters they have been reading about and utilize such higher-end Language Arts skills such as meta-cognition, prediction, and synthesis to write continuations.

9. The Expansion of Imagination

Children now live in a world framed too much by boundaries, rules, and for that matter, the limited imagination of others. Comic books, although fashioned in the “literary world” of its creators, have a unique quality that anything can happen. Unpredictability and magic still exist. Due to the twin realities of monthly publication and the time invested in reading, the imagination of the reader can expand in incalculable directions.

Parents might be surprised to learn that the Ontario EQAO and the CAT4 (Canadian Achievement Test) both feature comic strips and sequential narratives in their assessment of reading and writing. All of the tenets of Language Arts: plot, character, conflict, mood, setting, and even vocabulary can be bolstered by the reading and creation of comic books. Male readers would especially be aided by their continued exposure to this genre.