15 charms every Potterhead must know 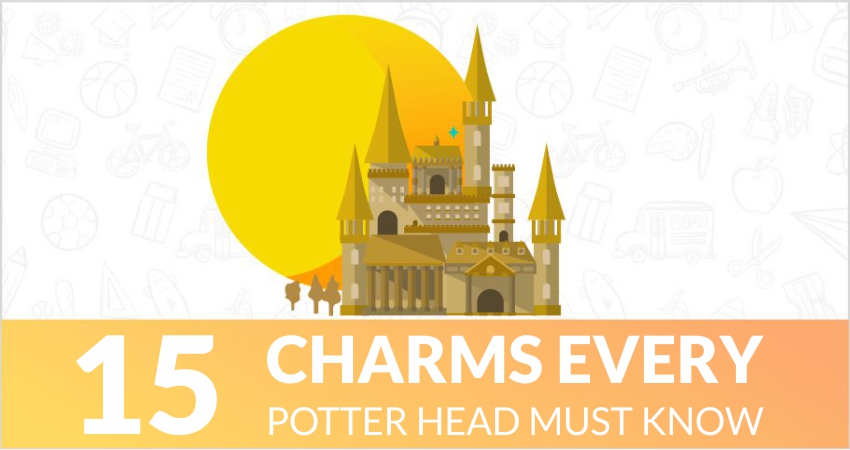 Every Harry Potter fan knows at least a few Harry Potter charms and spells. However, only the true Potter fans know these 15 charms from the movies, books, and interviews with the writers and actors. There is a lot of Harry Potter lore that is not entirely out there in the world, which is why every Potter fan over the last decade wants to know which Harry Potter spells are the best ones in the Hogwarts universe.

Aberto is one of the coolest Harry Potter spells that enable wizards and witches to open any door at any time. It has been used at pivotal points in Harry’s journey, as he proudly goes through challenge after challenge. Queenie Goldstein introduced us to these Harry Potter spells when she tried to gain entry to the office of Percival Graves as an alternative charm. What is the meaning behind Aberto? Portuguese and Galician experts suggest that Aberto translates to “open.”

There is an exciting meaning behind this popular Harry Potter spell. The Wingardium Leviosa meaning is a Latin translation that gives us ‘wing’ and ‘arduus’ – proudly elevated, and ‘Levo’ for rising. The compounded meaning gives us proudly rising in the air.

Accio – You can summon anything you want

Young fans can summon any object they want towards the caster by being clear in their incantation. Accio can summon anything except for the magical Flobberworms, which is something that every Harry Potter fan should know. There exist counter-spells for Accio, which can negate the powers of these Harry Potter spells.

Expelliarmus is one of the most used Harry Potter charms by Harry Potter himself. It is his favorite of the spells to instantly disarm someone who is directly in the line of combat. Harry Potter fans jump from one room to another, referencing these Harry Potter spells when participating in the lore.

This was one of the earliest Harry Potter spells used to completely freeze Neville Longbottom’s body. He was stuck in his form, unable to move, when this charm was used in his direction. This was also a pivotal spell used to give Harry enough momentum to continue his journey through Hogwarts.

Lumos and Nox – Bring light and take it away

Most parents may remember the word luminous when thinking of unique Harry Potter spells. They are one of the most favorite Harry Potter charms, as kids can switch the light of their torches on and off when saying this spell. While Lumos is the bright light, Nox is all-encompassing darkness.

Stupefy – To stun someone

The Latin word for one of the most interesting Harry Potter spells translates to astonishment and stunning. Harry can use this incantation to make someone fall unconscious easily. It is used widely throughout the books and can even stop moving objects that are larger in dimension. It can also be used to pause charging animals that may otherwise pose as a threat.

Obliviate is a part of the memory-based Harry Potter charms that makes anyone instantly forget memories. It was first used in the book Harry Potter and the Chamber of Secrets when Gilderoy Lockhart unsuccessfully cast this spell with a broken wand resulting in a backfiring. This was a pivotal point in the narrative and has made the spell quite popular among younger Harry Potter fans.

This is a great lesson in modern science and ancient linguistics. Agua means water, and the spell is a powerful one that casts a jet of water from the wizard’s wand. Aguamenti is a critical spell designed to come in handy when there is a fire in front of the young wizard. It can counter many fire-based spells and provide relief to a traveling bird from the school’s nether regions.

This is something straight out of nanoscience or bioengineering. Harry Potter charms have instilled a sense of curiosity and passion in medical sciences. Be careful, though; if healing charms are not used correctly, then the target can end up with no bones leftover. We learned this directly when Gilderoy Lockhart dissolved Harry Potter’s arm completely.

Riddikulus – Make light of the challenging

Incendio – Make fire through the wand

Energy transfer, in its rawest form, is the transformation of matter into energy. This is perfectly displayed as Hermione used it to try and destroy the locket of Salazar Slytherin. It is one of the most powerful Harry Potter charms available and is not commonly known among muggles.

Langlock – A lesser-known spell to silence

Langlock is one of the rarer Harry Potter spells that can silence a speaker instantly when aimed at them. It is a powerful spell devised by the great Severus Snape for awkward parties and to make sure that he is not in the middle of a long conversation. It is quite a unique spell that was only mentioned in the books a few times.

Orchideous – The most common magician’s trick

Probably the most common of magician tricks, Orchideous is an impressive spell that makes flowers come out of the tip of the wand. It is one of the coolest Harry Potter spells that can instantly give the wizard a last-minute Valentine’s day gift.

Young wizards can instantly learn these fantastic Harry Potter spells and venture deeper into the magical world of Hogwarts. Children and young adults from across the world simply love the adventures of Harry Potter, and Harry Potter spells make up a significant portion of the mystery behind the character. Our beloved protagonist loves to cast his favorite spells and surprises many dinner guests with some new ones that no one would have heard of.